At Bengaluru’s Jyothi Seva Home for Blind Children, students spend hours working with what looks like a gaming device. They are actually learning with Annie. This device developed by Thinkerbell Labs helps visually impaired children learn to read, write and type in Braille in a gamified way.

Annie is in use in eight blind schools in India with smart classes dedicated to it. It is available in English, Hindi, Kannada, Marathi and Telugu and soon in Tamil and Malayalam too.

Annie is a self-learning device which allows a visually impaired learner to become literate, increase their vocabulary in English and the vernacular language and improve basic numeracy. We initially started as a device focused on literacy but after several requests towards interactive content for language learning, we have expanded our scope to include language learning and vocabulary. – Aman Srivastava, Co-founder, Thinkerbell Labs

The Thinkerbell Labs team has worked with experts to capture the nuances of the regional languages correctly. “Every language has its own unique feature that children typically use to remember words”, explains co-founder Sanskriti Dawle. “We worked with consultants in every language and teachers”. The Thinkerbell Labs team made up of people from diverse regional backgrounds helped as well. “They added stories and characters they used as kids”, says Sanskriti. 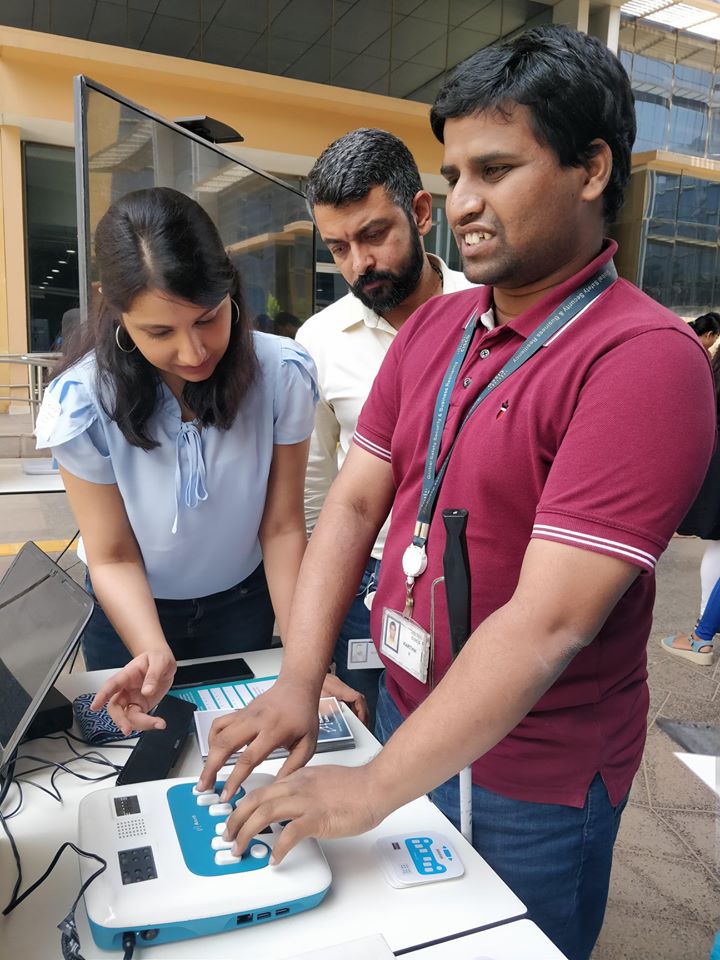 Schools in the United Kingdom are interested in Annie as well. “Annie is available in a UK accent so it can cater to the needs of users in schools in that country”, says Dilip Ramesh, Chief Technical Officer, Thinkerbell Labs. There’s an Arabic version too. Annie will soon be going live at GEMS Modern, an international school in Dubai.

Thinkerbell Labs partnered with SELCO Foundation to roll out Annie smart classes in two blind schools in Bengaluru. The Tech Mahindra Foundation, which is backing the start-up, rolled it out in partner organisations in Nagpur, Delhi and Chandigarh. In  Telangana, the Karimnagar district administration is supporting Thinkerbell Labs. The Poona School for the Blind has financed the Annie smart class on their own.

Annie has gamified Braille learning to suit children at various levels through lessons, games and challenges, It fosters independence too as children set their schedule. They learn at their pace, picking up from where they left off. The progress is monitored by the school principal and Thinkerbell Labs team.

This approach is working well, says the team. “The Karimnagar school showed over 100 hours of usage in just two weeks, which is quite remarkable”, says Aman. One child completed 14 hours in two weeks. “The games approach has changed the way of learning and how much they learn”.

What makes Annie a game changer is that it can be seamlessly integrated in mainstream schools. Any regular teacher can cater to the learning needs of a child with visual impairments studying in an inclusive setting. This is important as many visually impaired children in India and abroad struggle in mainstream schools.

This is exactly what the Thinkerbell Labs wants to enable, which is to make education more inclusive, so schools no longer shut the door on the aspirations of visually impaired children. What could be a better tribute to Anne Sullivan after whom Annie is named. Sullivan was Helen Keller‘s teacher and among the most respected special educators in the world.