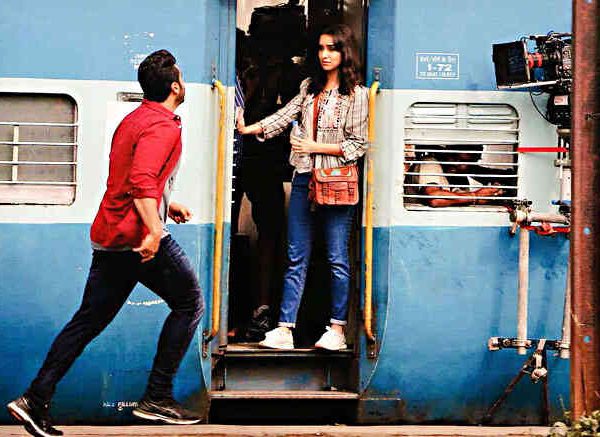 Yet another Chetan Bhagat novel makes its way to the silver screen! This time it’s Mohit Suri with a romantic drama, Half Girlfriend.

Arjun Kapoor is good as Madhav Jha, a Bihari boy weak in English but strong in determination.

He falls for Riya Somani played by Shraddha Kapoor.

Riya, unlike Madhav is explicitly good in English and sings amazingly, but is confused about her aspirations.

Seema Biswas does well as Madhav’s mother and Vikrant Massey is impressive as Shailesh, Madhav’s friend.

The plot of the movie is fresh, the music is also good. But the story has its own flaws.

Twice during the movie, Madhav and Riya sneak through the security to get at the top of the India Gate which seems hard to digest.

Speaking as a visually impaired viewer, it is difficult to keep track of the story as it very often switches between the past and the present.

You will also have to depend upon sighted assistance to understand the proceedings during the songs due to lack of audio description.

At times, you may feel that Mohit Suri has done half justice to a good story. But thanks to the lovely chemistry between Arjun and Shraddha powered by the delightful music, Half Girlfriend is recommendable.

If you enjoy romantic and emotional films, go for it. But do take along a sighted buddy.

Half Girlfriend is a Hindi romantic drama film directed by Mohit Suri. The film is based on the novel ‘Half Girlfriend’ written by Chetan Bhagat.

The film stars Arjun Kapoor (as Madhav Jha), Shraddha Kapoor (as Riya Somani) in the main roles. Seema Biswas (as Madhav’s mother) and Vikrant Massey (as Shailesh) play supporting roles in the film.

The film introduces Madhav as a rural boy from Bihar who struggles to speak in English but gets admission in St Stephen’s College in Delhi through sports category.

Soon, Madhav expresses his love to Riya, a rich girl who also studies in the same college.

But due to some reasons, Riya rejects the proposal and decides to be his half-girlfriend.

Madhav’s worried friend Shailesh warns him to check with Riya if she is serious about the relationship.

This shocks Riya who decides to end the relationship, get married with her childhood friend Rohan and settle in London.

The film then shows how Riya enters Madhav’s life again and supports him in the social cause of girl child education.

The first half of the film was fine but the second half was slow and little boring. Performances by Arjun, Shraddha and Vikrant were good. Best part of the film is Arijit’s melodious and emotional song ‘Phir Bhi Tumko Chaahunga’. Overall, Half Girlfriend movie is a good one-time watch.