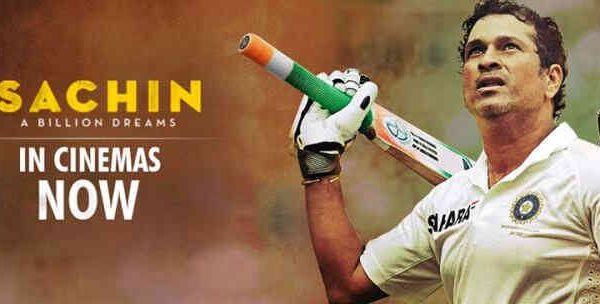 From a cute little boy to the Master Blaster and from the Master Blaster to the God of Cricket, Sachin: A Billion Dreams directed by James Erskine, is an amazingly portrayed story of the great cricketing legend from India, Sachin Ramesh Tendulkar!

Sachin’s childhood is a delightful treat to watch. His bonding with his family and friends, mentors and team-mates, media and fans is very well described. Most of us do have a vast knowledge about him as a cricketer. But to sneak into his personal space and to get to know his feelings and sentiments is what you will enjoy during the narrative.

During the movie, one might also feel that while all the glorious events in his life are very well highlighted, Sachin’s opinions regarding controversies and some of his failures are not elaborated.

But we all know that Sachin’s answer to his critics and failures is his bat and not his words. Sachin’s biopic justifies that to be what Sachin is today it takes enormous amount of hard work, determination and sacrifice.

For the strong dose of inspiration, Sachin: A billion dreams is a must watch, but with a sighted partner.

Sachin: A Billion Dreams is an Indian sports drama and biographical film based on the life of Indian cricketer Sachin Tendulkar.

The film is directed by James Erskine and produced by Ravi Bhagchandka and Carnival Motion Pictures under 200 NotOut Productions.

The film’s music is by A R Rahman and it is written by James Erskine and Sivakumar Ananth.

It is released in Hindi, English, Marathi, Tamil and Telugu languages.

I think the film is a brilliant one made on cricket. Director James Erskine has managed to keep the film short and it touches different phases of Tendulkar’s 24-year-old cricket career and personal life.

The documentary tells us about the ups and downs in the life of an athlete and the way Tendulkar’s family had an important role in supporting him to manage his emotions and deal with certain situations of life.

It gives many inspirational lessons and tells us about the real hardwork done by Tendulkar to be recognized as the ‘God of Cricket’.

Tendulkar himself narrating his real life events from childhood to the retirement from the game makes the film a MUST watch, especially for cricket fans.