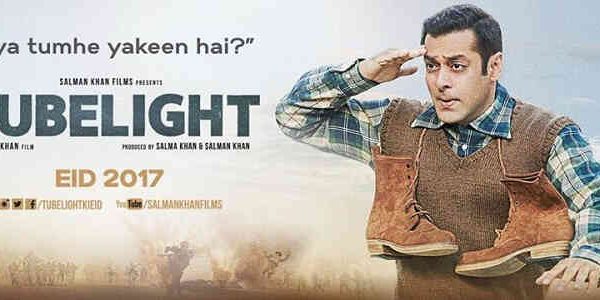 Tubelight is a Hindi family drama film written and directed by Kabir Khan. It is based on the 2015 American film Little Boy.

Tubelight film features Salman Khan as a developmentally disabled man (Laxman), who uses his faith to bring back his brother Sohail Khan (Bharat) from the 1962 Sino-Indian War.

The film also stars late actor Om Puri (as Banne Chacha), Chinese actress Zhu Zhu (as Liling) and Matin Rey Tangu (as Liling’s son Guo) in important roles. It also has a special role of Shah Rukh Khan as a travelling magician who motivates Laxman to believe in himself to achieve what he wants in life.

The film celebrates the emotional bond between the two brothers Laxman and Bharat and also deals with the social issues of bullying faced by the disabled and racial discrimination.

The best parts of the film are Laxman and cute little boy Guo’s innocent pranks. I also liked the way Banne Chacha accepts Laxman the way he is and provides him the much-needed guidance and care at every difficult stage of his life.

One can come across many interesting and inspiring messages in the film like ‘fear is the greatest enemy’, ‘if a person has confidence in his heart, he can even move a mountain’, and ‘faith is like a tubelight.. it takes time to light up … but once it lights up, then it brightens everything around us.’

Tubelight is a good one-time watch film with family and friends for its ‘live and let live’ story concept, simple and natural acting performances by all the characters, peaceful background music and a feel-good happy ending.