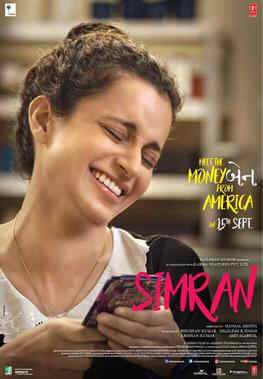 Directed by Hansal Mehta, the movie is based on the life of Sandeep Kaur, an NRI in the United States who has been convicted of four bank robberies.

The film introduces Praful Patel (Kangana Ranaut) as a young Gujarati girl and a divorcee who works as a housekeeper in the US.

Praful’s difficult relationship with her worried father and money-related issues makes her addicted to gambling.

Praful’s life changes when she is threatened by a gangster to pay back the money she lost in gambling.

To get rid of the danger, Praful robs money from the banks in the fake name of ‘Simran’.

Meanwhile, she also dates Sameer (Sohum Shah), a guy arranged by her parents for her second marriage.

However, life doesn’t go as per Praful’s plans and she breaks up with Sameer and lands up in the jail.

Best things about the movie are the natural acting performances, creative dialogues and sound storyline.

Not-so interesting parts of the movie are its slow narrative pace and some boring scenes that looked repetitive.

The film is a decent one-time watch for Kangana’s fans and movie-goers who love to watch women-centric films.