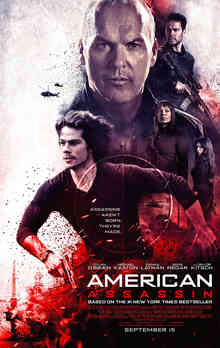 American Assassin is an American action thriller film directed by Michael Cuesta. The film is based on Vince Flynn’s 2010 novel of the same name.

The story is about a young CIA super-agent Mitch Rapp, who helps a Cold War veteran try to stop the launching of a nuclear weapon in the Middle East.

Not having read the book, I enjoyed the action scenes pulled brilliantly by Dylan O’Brein. Luckily, his character development was not forced and he stayed true to his beliefs and reasons till the end.

Sanaa Lathan’s part as Irene is attractive as well as street smart but the model turned actor Shiva Negar lacks the seriousness of her role as Annika. Michael Keaton is solid and strong as Stan.

Good acting performances and great action sequences made the film better than some mindless action movies.

For those who are thriller and action movie lovers, American Assassin is an interesting one-time watch!