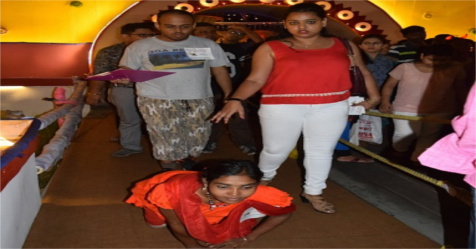 The West Bengal government had announced many disabled friendly measures at major Durga Puja pandals in Kolkata. But how effective were these claims? Newz Hook spoke to Abhirupa Kar from Civilian Welfare Foundation, an NGO active in disability rights, to get the true picture.

Kar said that the arrangements made during the 10-day festival season was better this year in some places for people with locomotor disabilities. “There were wheelchairs and some of the pandals had ramps so the wheelchairs could go up to the stage”.

However, many major pandals failed the accessibility test for wheelchair users, and when it came to the deaf, it was a total letdown. There was no proper signage with entry and exit points clearly displayed, and no sign language experts.

We are completely overlooking a big section of the disabled community, points out Kar. Even when it comes to those with intellectual disabilities, there was no special assistance at pandals.

The state government had announced that the pandals would be made accessible for the blind and a Braille map and audiobook was released before the pujo season began. These maps and guidebooks were to be made available at major pandals.

But many blind people were left disappointed because they were not available at the listed pandals. Shockingly, organizers at Tridhara, which was among the listed pandals, said they had no idea that something like a Braille map or guidebook was even published.

What was disappointing was the treatment handed out at major pandals towards the disabled. Some like the famous FD Block pujo at Salt Lake had no wheelchairs although it is mandatory to provide them.

“We had a person in our group who was on a wheelchair and she had to crawl the whole way to see the puja”, says Kar. “The path was rough and muddy and she was crawling all through. There were no organizers present to help us.”

Also, entry points to all the pandals to wheelchair users was from the back so they were denied the outer view of the beautiful pandals. “It was like they were doing us a favour by letting us in”, adds Kar.

The CWF plans to connect with the Kolkata Poilce next year to ensure that the pandals are more disabled friendly.