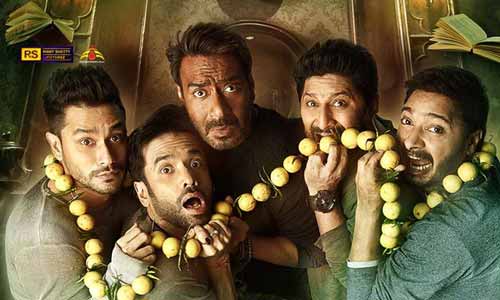 The comedy thriller film is directed and co-produced by Rohit Shetty. It is the fourth part in the Golmaal film series.

They find a baby outside the orphanage and name it as Khushi. All live happily together but a small argument between Gopal and Madhav separates them.

Gopal and Laxman Prasad decide to leave the orphanage and stay together. After some days, Madhav, Lucky and Laxman also run away from the home, leaving Khushi alone with other kids.

The story moves to the present where Gopal and Laxman Prasad work as goons under Babli Bhai (Sanjay Mishra) while Madhav, Lucky and Laxman work under Vasooli Bhai (Mukesh Tiwari).

Anna Mathew (Tabu) is a librarian who can see spirits of good people. She talks to them and fulfills their last wishes.

Damini (Parineeti Chopra) is a caretaker of a blind man living in a bungalow near the orphan home.

The film then shows how Anna along with Damini try to reunite both the gangs who cannot stand each other since childhood.

Who is Damini really and does she have any relation with Khushi forms the main suspense of the story.

Golmaal Again is a laughter adventure movie with its fair share of thrills and surprises that can make people think about life in a magical and hilarious way.

This total family entertainer is a good one-time watch for its classy performances, horror with many ROFL moments, engaging story, brilliant one-liners and superb direction.