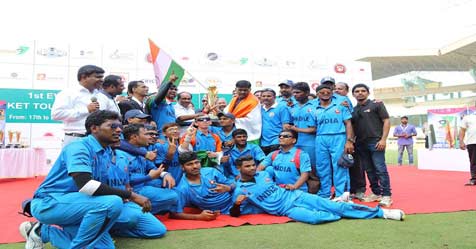 Blind cricket team of Odisha has won the Sixth East Zone Cricket Tournament for the Blind at Jadavpur in Kolkata recently.

Odisha blind cricket team have won all the matches of the tournament.

Odisha reached final by defeating Tripura by 72 runs and Jharkhand by 27 runs.

Lingaraj Routray and Sukhram Majhi received the ‘Man of the Match’ awards in the first two games.

In the final match, Odisha beat Bengal by 77 runs to win the trophy.

Odisha team captain Jafar Iqbal and Lingaraj Routray were declared ‘Man of the Tournament’ in B1 and B3 category respectively.

The state team has qualified for the 24th All India Cricket Tournament for the Blind that will be held in Mumbai from 30 October to 3 November.