Determined to do everything declared impossible – My Take by Sujith Varghese, fitness influencer on a wheelchair 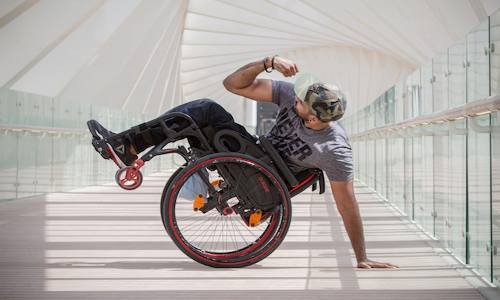 In My Take this week, Sujith Varghese, official fitness influencer for the Dubai Fitness Challenge, talks to Newz Hook about his road to fitness after a life changing bike accident that left him a paraplegic.

It was XXXX (year of accident) and I was in my final year of graduation in a Bengaluru college. I had just got introduced to boxing and I loved it so much that I was planning to make a mark in it while studying chartered accountancy.

My life changed in an instant. I remember making plans for a bike ride with friends and was walking down the stairs towards my bike. That is the last memory I have.

The next thing I remember is waking up in a hospital ICU. I was apparently unconscious for three days and had been through three major surgeries. I suffered 18 skull fractures, broken three ribs, and was paralysed below the waist, as my spine at T-5 level was compressed. Doctors said I would have a weak memory, had lost vision from one eye, and would never walk again.

I have proved them wrong on the first two counts.

Through school and college I had been active in sports and that helped me handle the impact of the accident. While doctors were not very hopeful about my situation, I believed that I would be able to come out of this as I had been fit and had a strong body. I never gave up and at the rehabilitation centre, I used to always try and push myself to do more.

What was hard was losing about 90% of my friends in the initial months after the accident. People I depended on were not there and it left me depressed, sad and angry. People spoke as though my life was done and there was no coming back.

I had reached a point where I felt like I would just burn down. I gathered all my courage and decided that I would go on to do all the things that had been declared impossible for me.

Like I was told that I would never be able to sleep in my room as it was on the first floor. I placed myself on the step and picked myself over 18 steps to my room and came back down. I was told that I would never be independent. Again, I have proved people wrong. Last December, I took a trip by myself from Dubai to Bengaluru and had a good time. They said I could never gym again. I don’t think I have to explain this one!

After the accident, sports was not my first best option so I decided to get back to gym training. At first there were some doubts I could do that and I faced challenges but I overcame them.

I started off with small weights and built my way up. I would search the Internet for ways in which other paraplegic body builders train and came up with exercises. I also checked out other fitness athletes on wheelchairs. I work out 5-6 days a week and travel to the gym by myself on the Metro. I can benchpress 100 kg until date and I still box the bag while sitting on a wheelchair.

The Dubai Fitness Challenge has been initiated by H.H Sheikh Hamdan bin Mohammed al Maktoum to make Dubai the most active city in the world. It involves doing any sort of activity like walking, running, swimming, etc for 30 minutes for 30 days.

I believe this is a great step for people who want to transform themselves but were holding themselves back because they did not know how to. It is a chance to be a part of something big.