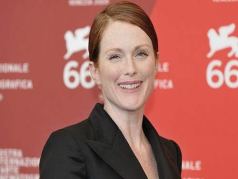 American actress Julianne Moore has said that she learned American Sign Language to prepare for her role as a deaf woman in new movie ‘Wonderstruck’.

The movie will show the actress playing two parts, one as a silent movie star in 1927 and second as a deaf woman in 1977.

‘Wonderstruck’ film tells the story of a young boy in the Midwest and about a young girl in New York from fifty years ago as they both find the same secret connection at the same time.