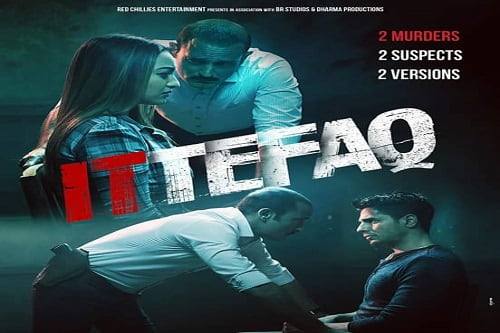 The film is directed by Abhay Chopra and produced by Red Chillies Entertainment and Dharma Productions.

It is a song-less film and is inspired from the 1969 film by the same name.

The movie opens with a double murder case which has only two witnesses, who are also the main suspects Vikram (Sidharth Malhotra) and Maya (Sonakshi Sinha).

Vikram is a well-known writer from the UK who is majorly suspected to have killed his wife and Maya’s lawyer-husband on the same day.

Dev (Akshaye Khanna) is a police officer who is given a three-day timeline by his senior official to investigate and solve the case.

Vikram and Maya share their own stories about the events of that night in an emotional way.

Maya accuses Vikram to have killed her husband whereas, Vikram narrates that Maya and her lover were behind the death of Maya’s husband.

Dev believes that there can be only one truth and he does every possible thing to find out what happened that night.

Vikram walks free when Dev finds out proof against Maya and her lover.

But is Vikram really innocent or is it just another story by the writer in him forms the unimaginable climax of the movie.

Ittefaq is 100 minutes of mystery with some funny dialogues that keeps the viewers engaged.

The movie is an interesting one-time watch for its strong script, good direction and decent acting performances.