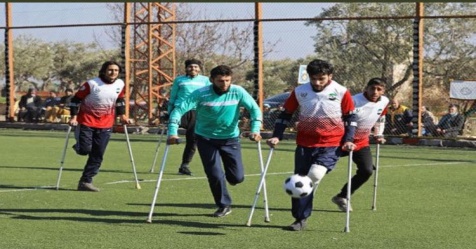 45-year-old Ehsan Al Khalili was forced to flee his home in Syria after the conflict broke out. He had no idea what the future held for him.

But two years on, the blind refugee has overcome his difficulties and is using his music to help fight the biases that people with disabilities face. He hosts music classes at a refugee camp in Azraq, Jordan, and his classes are aimed at disabled kids living in the camp.

Ehsan lost his sight when he was 11 years old when he fell into a large hole in the street when riding a bicycle with friends. The head injuries damaged the nerves in his eyes. But he did not let that come in the way of his dreams of becoming a professional music player.

He learned how to play the drum by playing along to Egyptian songs and at 16 years of age, joined a blind school. His band was all blind so he could play to female guests at traditional weddings as men and women are seated apart.

When conflict broke out, music came to save him. At the camp, he met with another disabled musician and started a music class for children, including those with disabilities.

Ehsan believes that it is important for the disabled to fully integrated in the community and hopes his example can fight the stigma about people with disabilities.