‘My Beach Too’ – Chennai accessibility campaign makes a splash 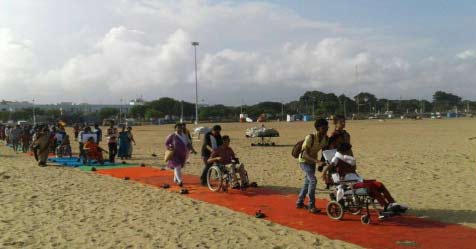 Going to Marina Beach in Chennai was always a project for Unmul Khair, who grew up in the city.

“I always wanted to the beach, but never could because its inaccessible”, says Khair, who is a wheelchair-user working with Vidya Sagar, a city NGO. “I have to take many people along just to push my wheelchair. One or two people are not enough and that feels odd”.

Vidya Sagar has been working for decades in the field of disability rights, with a focus on accessibility, employment, education and lobbying with the government.

Marina Beach, is the world’s second largest and central to Chennai’s culture. The lack of access for the disabled and the elderly is something Khair felt very keenly about. It led her to launch a petition on Change.org.

In 2016 Vidya Sagar launched a program demanding greater accessibility to the city’s beaches. This year too the NGO ran a weeklong campaign starting from 3 December. This ended on 10 December, which is marked as Human Rights Day across the world.

Last year on WDD, the students of Vidya Sagar called the concerned civic authority about the issue and a temporary pathway was built at Marina Beach. Over this year, there have been many meetings between DRAI, Vidya Sagar and corporation authorities, but nothing had moved. The path is still not smooth and it is difficult to push wheelchairs- Bhavna Botta, Member, Disability Rights Alliance of India

Khair says the corporation promised to build permanent pathways near all the beaches and arrangements were made for mobile toilets, but not enough thought and planning went into it. As a result, the wheelchairs cannot go inside the toilets as the doors are narrow.

We did an access audit with the DRAI and worked on the accessibility features based on the Coastal Regulation Zone regulations. But we don’t have a permanent structure so far- Unmul Khair, Petitioner, NGO Vidya Sagar

Concerns that the Chennai Corporation cannot turn a blind eye to for much longer going by the energy on display on Sunday at Besant Nagar beach, on the final day of the campaign.

Various people gathered to push for accessible pathways to not just the water, but also beach wheelchairs and public toilets. Signatures of support were collected and these will be submitted to the Commissioner, Greater Chennai Municipal Corporation.

Hopefully this show of support will translate into Chennai citizens getting access to what is a fundamental right under the Indian Constitution.