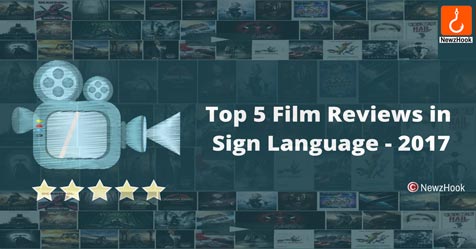 No end-of-the-year review can be complete without a feature on our Top 5 film reviews in sign language, something that we here are NewzHook are truly proud of launching. Our team of sign language reporters Shalaka Pol and Arti Umrotkar were busy at work reviewing the new releases and bringing their perspectives.

So here is the Top 5 list of 2017 based on both box office performances and story appeal.

Wonder Woman, the American superhero film, was definitely among the most awaited films of the year, especially because it had a woman holding centre-stage. The film was also a first for having a woman director at the helm.

2017 was a year that was dominated by animated action films and Despicable Me 3 with its tales of Gru and his band of minions held sway yet again.

Aamir Khan came up with yet another winner Secret Superstar, his end of the year offering that proved both a commercial and critical hit. What clinched the vote for us was a special screening for deaf audiences – definitely a move that other filmmakers should watch and learn!

Hindi Medium, starring Irrfan Khan, won both hearts, minds and awards with its simple and moving story of how parents in India struggle to get their kids into good schools.

And finally The Boss Baby , an animated film about a baby who is also a secret agent.