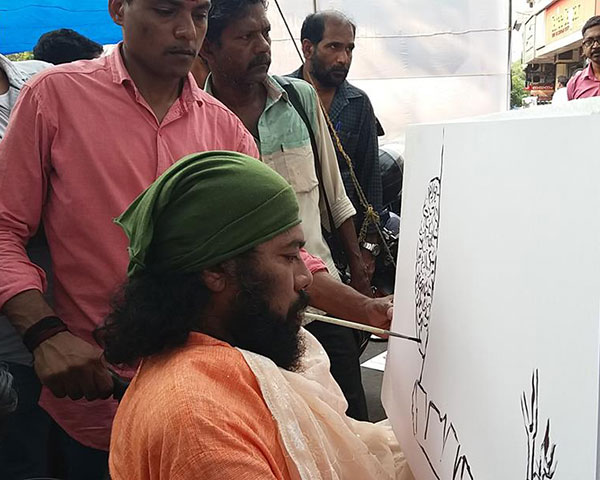 The story behind the successful Mangalore-based company GK Decorators is quite incredible.

Company founder lost both arms in an accident

The man who started the company is Ganesh Kamath, and when it comes to organising major events in the region, his company GK Decorators is the one everyone goes to. His form recently did the entire set up for the Dharma Sansad in Udupi. What is remarkable about Kamath is that he is also a double amputee, who lost both his hands in an electrical accident many years ago.

Kamath, who dropped out of school in class 7, used to work as an electrical contractor. He was asked to climb a 29-foot scaffolding to fix a light bulb on a floodlight by his employer six years ago. He lost his balance and fell down and the accident was so severe that his hands had to be amputated.

Kamath slipped into depression and thought of suicide after the incident

Ganesh’s hands had come into contact with some cables next to a pole and he was electrocuted. By the time he was rescued his hands were damaged badly.

He was just 25 years old and went into depression. He was from a poor background and was responsible for his family. It took Ganesh three months to recover from the incident and he was given prosthetic limbs.

A meeting with a family member cheered him up and he used whatever money he had left from his accident insurance to buy some music equipment to rent out for events. From there, he went on to found GK Decorators, that has a turnover of many lakhs a month.

His company employs 40 semi-skilled workers and a few years ago he got married and has a daughter. He is proud that his business is able to provide for 40 people and their families.

He now takes time out to speak to other disabled people and inspire them with his story.