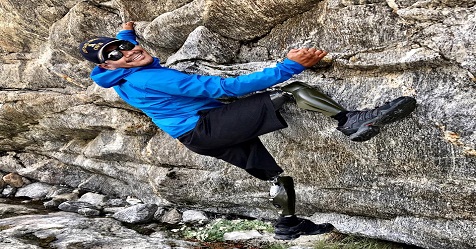 Hari Budha Magar lost his legs in a bomb explosion in Afghanistan seven years ago, but it did not stop him from dreaming about climbing Mount Everest.

Lost his legs in war, yet found the strength to climb mountains

The British Gurkha ex-soldier has been training for the past two years and has scaled Ben Nevis in Scotland, Mont Blanc in Europe, and Mera Peak and Gosainkunda in Nepal. He has also kayaked around the Isle of Wight in England.

A Nepalese citizen settled in England, Magar mortgaged his house to raise the Rs 2.2 crore he needs for the Everest expedition as no potential sponsor was willing to back him.

Just when he was all set, came the Nepal government’s decision to ban double amputees, the blind and solo climbers from scaling Everest.

Many people have called the law discriminatory but Nepal believes that this is the only way to make climbing safer and reduce the number of deaths.

More than 290 people have died attempting to scale Everest, including two among the 29 disabled who tried.

Magar, who is now training at the Thorung La pass in Nepal, plans to challenge the legislation. He says he is doing this for everyone who wants to achieve their dreams.

“Nepal should be proud of me, not banning me” – Hari Budha Magar

Magar says that he is trying to give something back to his country. His campaign has attracted support from many mountaineers.