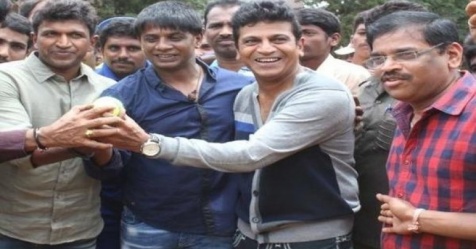 When 14-year-old Ullekh’s leg was amputated after it was crushed by a bus, he felt his life was over. The incident happened in October 2017 and since then the boy was in a state of depression.

While in hospital, he expressed a desire to meet his favourite star Shivrajkumar , popularly known as Shivanna. That dream came true when Shivanna came to meet him at his home over the weekend.

The star was in Mysuru to attend a local event and took time out to meet the boy, whose entire family is a fan of the late star Dr Rajkumar. Ullekh is fond of both his sons, Puneeth and Shivanna. So the child was very happy when Shivanna spent over an hour with him.

Shivanna told the boy not to lose heart and that with technological advancements, his porblems with mobility would be reduced.

“Since Ullekh has not been able to attend classes, we are collecting notes from his school and he is studying at home. He will be allowed to write his exam this year,” he added.

Recalling the accident, he said that on October 23 after finishing school at 4.15pm Ullekh reached the KSRTC city bus station at around 4.45pm, but a conductor refused to let him into one bus as he had a pass, and so he tried to catch another.

“But once again this bus conductor too noticed that he was a pass holder and reportedly asked the driver to move on. Ullekh fell down in the meanwhile and his left leg was entangled in the back wheel of the bus. Although the people around shouted for the bus to stop , the driver did not and as a result his left leg was crushed. He was rushed to a private hospital, where doctors removed his left leg after surgery. He is a brilliant child and dreamt of becoming an IPS officer,” he recounted sadly.

The family has registered a complaint of negligence against both bus conductor and bus driver. “I will fight to get justice to ensure that such incidents don’t ever happen,” Mr Puttaswamy vowed.