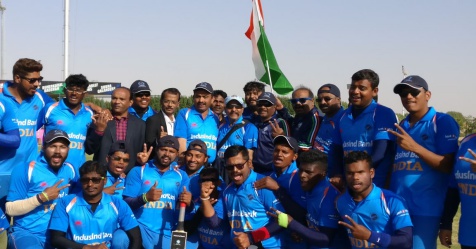 The Indian blind cricket team has shown its mettle again and won the 5th Blind Cricket World Cup in Sharjah on Saturday.

The Indian team faced their arch rivals Pakistan in the final match and defeated them by two wickets in a fiercely fought game.

India won the toss and decided to field while letting Pakistan bat first.

The team from Pakistan made 308 runs for the loss of eight wickets in 40 overs.

The victory of the Indian team became final in the last over.

Indian team had remained unbeaten throughout the tournament and played amazing matches with grace and skill.

India had also defeated Pakistan in the T20 Blind World Cup final last year. The team did it again and made the country proud by their performance and amazing sportsmanship.