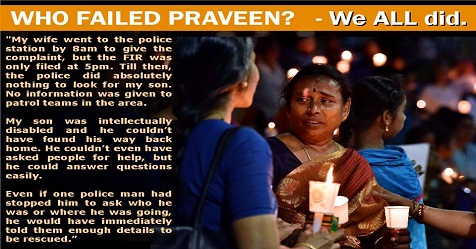 Disability rights groups in Chennai have pointed to the critical need to set up an efficient network to ensure the security of the country’s vulnerable population.

What happened to Praveen?

This is after the tragic death of Praveen, a 26-year-old intellectually disabled man earlier this month. Praveen, who worked at a city hotel, got lost while boarding a bus to go to work. His mother, who was with him reacted promptly and went to lodge an FIR but the police was slow to react. The FIR was lodged late in the evening of 13 January, almost eight hours after he went missing. No alerts were sent to patrol teams and there was no adequate follow up.

Praveen was killed in a road accident, less than 12 hours after he went missing.

“There are any number of elderly people, people with dementia this could happen to. We need to have a system in place so families can get to the police in such cases and the police are sensitized to respond appropriately” – Kalpana Rao, Principal, Day Centre, Vidyasagar school for special children

In Praveen’s case, the police is alleged to have failed at multiple levels. From failing to register the FIR promptly, to not alerting patrol teams in the city about the fact that he was missing. This means that the first 24 hours, which are crucial when anyone goes missing, were totally wasted.

“Praveen was intellectually disabled”, says Rao. “He looked normal, would not have asked for help but would have responded if asked. We need to have a system that addresses all these variables.”

Experts are suggesting that a network of parents and caregivers groups be set up, who in turn have access to a police helpline that is connected to a higher up so the action taken is prompt. However, so far, there has been little indication of any introspection from the Chennai police.

“The police has to come up with a solution.They have the mechanisms in place and the ability and onus to come up with ways to deal with this going forward. But we need a system and we need to go beyond reacting emotionally to one such tragedy” – Kalpana Rao