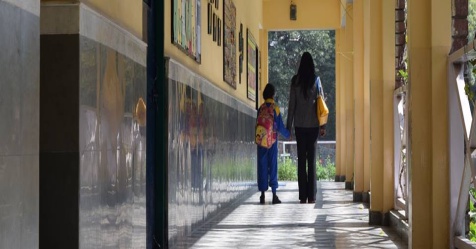 After winning accolades for her last film ‘The New Girl in Class’, Amrita Dasgupta is busy putting the final touches to her next project, which is also a film on inclusion and is titled – ‘Going To School’.

“This one revolves around three children, two visually impaired siblings, and one with cerebral palsy with extreme impairments”, says Dasgupta.

“They are first generation learners and belong to lower socio-economic groups. They got admission into a regular school in April 2010 and the film is about their challenges and triumphs, along with a larger perspective of inclusion in our society” – Amrita Dasgupta, Filmmaker

In the second film, Dasgupta casts a light on the infrastructure that is available in schools and the role that parents play.

Like her first film, this one is born out of her close observation of families with special needs kids. The idea for the first film was sparked off after a chance encounter with a special needs child in a government school in Delhi. Both her films are set in schools because this, Dasgupta, believes is the first step for any child, the stepping stone for a person.

“The idea is to take a look at education post the Right to Education Act. Does a private school have space for kids like these? Once children in mainstream schools study alongside special needs kids, they become sensitised. Schools may not be prepared for this as yet, but it is not fair to deny the child this basic human right.” – Amrita Dasgupta

What explains this persistent interest in a subject like inclusion?

Dasgupta says that it all began quite early, soon after she graduated, when she worked on a fun learning children’s series and had a chance to closely interact with the show directors’ daughter who had Down’s syndrome. Over the years, her engagement with the issue grew as she met more parents of special needs kids and visited schools that reached out to them.

“I have realised with the need to shift from special to inclusive set up. Segregation is not a solution. Persons with disabilities, too, have a right to part of society. Including them in school will contribute in the near future to a sensitive and responsible society that readily accepts persons with disabilities” – Amrita Dasgupta, Filmmaker