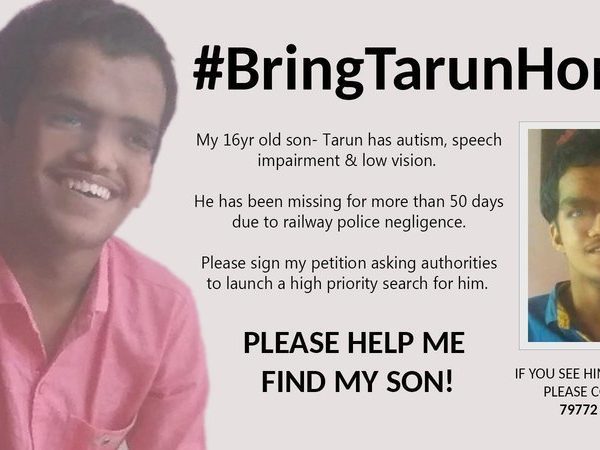 17 year old Tarun Gupta from Mumbai went missing on 1 October. Tarun, who has autism has speech and vision impairments due to which he cannot communicate. A day after his missing, a CCTV visual shows Tarun crying and asking for water to a CRPF official at Panvel railway station. The official bundled him into a Konkan bound train after which Tarun was last spotted at Chiplun in Ratnagiri. The family has no news about him after that. Tarun’s missing raises many safety and security concerns for people with autism and other developmental disabilities.

On 1 October, 17 year old Tarun Gupta from Mumbai was standing outside the compound of his house when a procession passed by. Tarun, who has autism, loves music and soon joined the procession because it had loud music and dance. His speech and vision is impaired, and the young boy clearly could not get back home. That was the last his family saw him. It has been over a month now. Along with the family, members from autism support groups and even social media users has been in the lookout for Tarun. But the efforts have not been successful yet.

Tarun stays in Colaba situated in South Mumbai and the procession in which he got lost was ended at Fort area. When the family realised that Tarun was missing, they immediately filed a First Information Report (FIR) at the CST police station on the same day.

Reportedly, a CCTV visual shows Tarun seeking help and asking for water from a CRPF railway official at Panvel railway station the next day he went missing. But the insensitive cop was in a hurry to bundle him in a Konkan bound train.

Tarun can be seen crying and asking for help in the video. If the official was sensitive and sensible, Tarun would have been back home by now. It was his duty to wisely handle a situation like that, especially when he knew that Tarun had a disability. Currently, we have not filed a case against the official because we are looking out for Tarun-Vinod Gupta, Tarun’s father.

According to reports, Tarun had reached Goa’s Samanthwadi railway station from where he had taken a Janshatabdi train back to Mumbai. He was last spotted at Chiplun railway station in Ratnagiri where he had reportedly gotten down the train. The family has no updates after that. “We have been searching for him in all these places since the past 20 days and we have not got any information. Since he has a speech impairment, he cannot communicate. Only his family members understand the sign language that he uses. He does not have vision for more than 15 metres if he does not wear his spectacles”, says Vinod.

The family is not leaving any stone unturned to ensure that Tarun returns back home safe. In spite of the many obstacles and limitations, they are looking out for Tarun. “We spoke to the parent only a couple of days back. In the last many years there have been incidents where both adults and children with autism goes missing. But they have safely returned as well. We hope the same for Tarun as well. As a parent support group, we are using our network to spot him at the earliest and will render all possible help to the family”, says a member of a leading autism parent support group from Mumbai.

Tarun’s missing has raised many questions about safety and security of people with autism and other developmental disabilities. Parents and disability rights activists pointed out that if the CRPF official at the station was sensitive enough to help Tarun, he would have been reunited with his family already.

“As a parent, this incident has shocked and scared me. We want our children to be independent and do things on their own. So when they do it, this is what happens. Our group ‘Forum for Autism’ has held many awareness and sensitization programmes for police officials on how to handle people with disabilities. It is sad that nothing is being implemented correctly. Tarun is still missing only because of the carelessness of the official”, says Fatima Sheikh from Mumbai who has a 19 year old son with autism.

Parents like Anita Pradeep from Kochi point out that this can happen to any family. That is why spreading awareness about autism is important. “I cannot imagine plight of the parent and what they must be going through now. When the child goes outdoors, parents can adopt safety measures like putting a phone number to contact inside their shirt pockets or even a name tag would do. In Tarun’s case, it was not the parents fault because he was standing right outside his house. I hope he returns back home safe at the earliest”, says Anita who has a 26 year old son with autism.

Tarun’s missing has left many unanswered questions. There has been no news about him ever since he was last spotted at Chiplun. The family is hoping for the best and Tarun’s safe return back home.