Eman Sulaeman, the foot-less goalkeeper has the world going wild over his reflexes 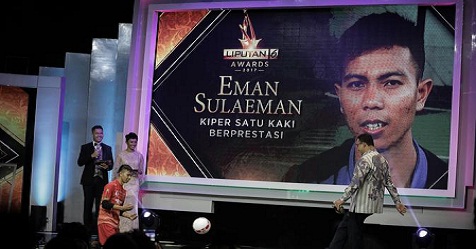 When Eman Sulaeman from Indonesia told his parents he wanted to play football, they were worried people would mock their son. Eman was born with no feet and one full leg.

Twenty years later, this 30-year-old Indonesian goalkeeper is driving the crowds at home and abroad wild with his moves, which have been called

Sulaeman’s fans recently came out in full strength to cheer him at a local court for futsal. This is a five-a-side game played on a hard pitch with hockey-sized goals.

They took pictures as Sulaeman protected his net by shifting quickly on stumps and his one leg.

He had to work very hard to get where he is. He spent a long time learning to walk in balance before he was able to kick the ball.

All those efforts paid off. Sulaeman’s friends asked him to join the local football team while he was studying electronic engineering.

In 2016, he joined the Indonesian team at the Homeless World Cup in Glasgow. He was an instant sensation and was named the competition’s best goalkeeper.