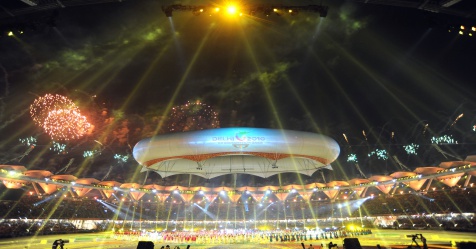 There is good news coming in for India at the Commonwealth Games 2018 with many sportspersons winning a rich haul of medals in various games.

What is going unreported is the apathy some of India’s para-athletes are facing.

India’s top para table tennis players, Maitreyee Sarkar (TT6 Singles) and Vaishnavi Sutar (TT6 Singles) are not able to practice or even enter the venue of the games. This is because the Paralympic Committee of India (PCI) has not sent a coach with the players.

Instead, the PCI has deputed an official by the name of Pushpa K to accompany the players.

As per CWG rules, all sportspersons have to be accompanied by a coach, says Pradeep Raj, Founder, Para Sports Foundation, who is an international-level para athlete.

The person, Pushpa, who is accompanying the table tennis players works at the PCI office. She is not a coach and because of that, neither Vaishnavi nor Maitreyee are being allowed to practice. The coach listed originally, Madhu Diwan, is with the Sports Authority of India, and she always accompanies the para table tennis players. But she was not sent – Pradeep Raj, Founder, Para Sports Foundation

Newz Hook has a copy of the original list of players and coaches, which has Madhu Diwan mentioned as the para table tennis coach. There is also a star against her name. This means her travel would have been at no cost to the government. Despite that, Diwan was not sent with the players.

The PCI did not respond to our attempts to get them to explain this decision.

Officials from the Sports Authority of India (SAI) told Newz Hook off the record that Diwan not given the clearance to travel at the last minute. Both Vaishnavi and Maitreyee are facing a hard time at the venue as there is no one to accompany them into the practice venue.

The presence of a coach with every team is necessary. There are eight para sportspersons that India has sent from swimming, powerlifting and table tennis. Only the powerlifting and swimming teams have a coach – Pradeep Raj, Founder, Para Sports Foundation

This is not the first time India’s para sportspersons have faced such apathy. There have been many media reports of officials and their family members accompanying the sportspersons, instead of qualified coaches.

In 2017, a major controversy broke out after a driver was chosen to accompany the Haryana Paralympic Committee to the World Para-Athletics Championships in London. The PCI had proposed his name. They went ahead with the decision to send him even after the SAI rejected the proposal. He accompanied the Indian squad as a team escort.

Clearly, despite all the talk of para sports getting a major boost, some basic systemic problems remain.