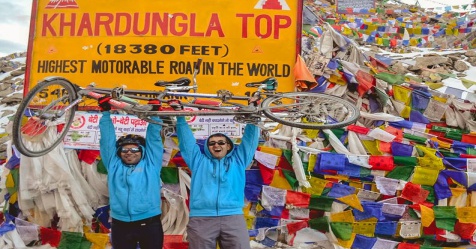 In 2016, Ganatra also became India’s first blind tandem cyclist to travel the 550-kilometre stretch from Manali to Khardung La in Ladakh, which is one of the most scenic spots in India.

41-old Ganatra spends his weekends cross training. He does some form of exercise for one hour every day.

In November 2017, Ganatra took part in a 30-hour race from Pune to Goa. This meant riding a tandem cycle for 640 kilometres. In 2016, he earned a elementary pilot’s license after completing a paragliding course. Later this year he plans to go scuba diving in Bali.

He started Adventures Beyond Barriers Foundation, which is a not-for-profit firm, to promote outdoor and adventure sports for people with and without disabilities.

Ganatra was a student when he found out he had glaucoma, and was going blind. By the age of 19 years, he had lost his vision completely. He wanted to study Information Technology, even though everyone told him that it was not possible for a blind person.

Ganatra’s friends and family read chapters from textbooks out to him, and for hands-on practice, he turned to friends who were in the line. In 1996, he set up his own computer consulting firm.

He went on to do a master’s degree in clinical psychology and cognitive neuroscience. He later launched a company called Yellow Brick Road, which is a counselling and facilitation firm, with clients like Larsen & Toubro, Mahindra & Mahindra, to name a few.