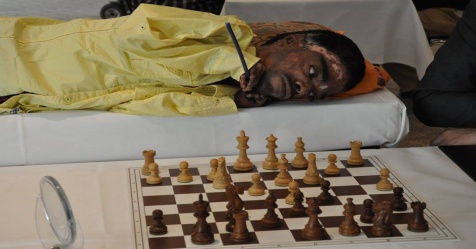 Chess champion Shailesh Nerlikar, who represented India in the World Disability Championship in 2015 and the Malaysian Paralympiad in 2016, passed away on 10 May this year.

The championship had two categories – Open and Under.

Nerlikar, who was living with 100% disability due to quadriplegia, started playing chess at the age of 15. Nerlikar had fragile bones and locked joints. Soon he developed a passion for the game and started teaching himself. He started playing at local championships in Kolhapur.

Nerlikar met chess champions who later became his coach such as Grand Master Kapil Lohana, and Grand Master Shekhar Ganguly. They helped him develop his grip over the game. He never let his disability come in the way of his love for the game.

He could not walk by himself so other players would carry him to the venue.

Nerlikar was awarded an international rating of 1,743 points by the World Chess Federation (FIDE), which was a high point for him.

Nerlikar passed away while preparing for an upcoming international chess championship. Victorious Academy is also planning to launch a film and a book on the chess champion.