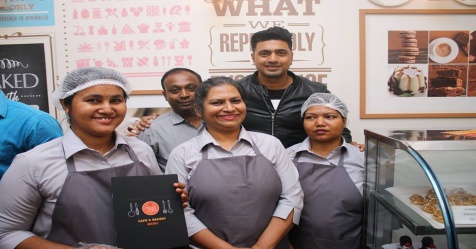 People with mental illnesses battle stigma at many fronts in India. They are often isolated inside their homes and by the outside world.

A cafe in Kolkata is helping to bring the smiles back on the faces of many people who have been abandoned because they were mentally ill. Called Crust & Core, the cafe employs women who are battling depression, schizophrenia, and other mental health issues.

People like 21-year-old Haripriya, who was found alone and frightened over a year ago near a city police station. She had been brought to Kolkata from her hometown in Maharashtra by her uncle and abandoned.

Today Haripriya is a star employee at Crust & Core. She loves to bake and plans to sign up for a baking course.

The cafe was started in February this year by the NGO Iswar Sankalpa. Most of the workers here are residents of the NGO’s shelter at Chetla.

Before the cafe was opened, 21 women living at the shelter were chosen for training by professional chefs. Ten opted out as they did not feel confident.

From pastries to pastas, the cafe stocks a range of desserts and savouries. These can also be ordered online. It is open all days of the week, except Mondays from 1 pm to 8 pm.

The 12-member cafe team has duties assigned based on their social and other skills. Some enjoy working in the cafe with customers while others prefer being in the kitchen.