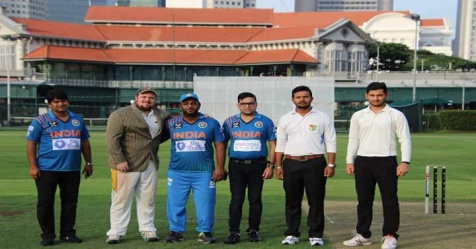 An incredible performance showed India’s team of physically disabled cricketers match their skills and thinking over three days. We are talking about the prestigious Allan Border Cup for the Physically Disabled where Indian cricketers took on players of the Singapore Cricket Club (SCC).

What made the win so amazing is that the opponents were players without disabilities.

The three-day event saw India and Singapore put up a spirited fight. The matches lasted over three days, with Team India emerging winners on the first two days.

The action-packed 72 hours were packed with good cricket. India won the toss on the first day and elected to field. They beat the SCC by three runs, with five balls to spare in the last over.

The second day, the SCC won the toss, and decided to bat first, and lost the match. The Indian team won by seven wickets.

On the third day, India won the toss, elected to bat, and lost the match. SCC won by eight wickets.

Captains of both sides were happy to play against each other. Indian captain Suvro Joarder said the win was a big morale booster for the players.

He said it was a sign that India was ready to take on more challenges.