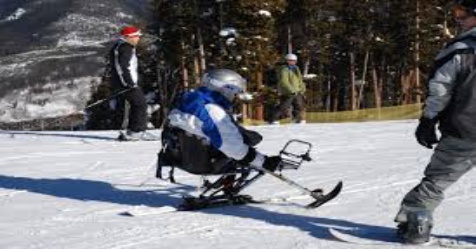 Who said disability is a barrier to having an adventure? Meet these three Bengalureans who are are breaking those notions.

Like Poonam Vaidya, a 29-year-old blind content writer, who constantly seeks to challenge the odds. She is always looking for a chance to do something different. She has even taken part in a none-month training programme at the Colorado Center for the Blind, which included sports such as skiing and rock climbing.

Vaidya gets a great sense of accomplishment from doing these. She fell a few times but soon picked it up thanks to experienced instructors who have been training for 20 years. Poonam lost her vision about eight years ago to optic degeneration.

That’s not all. Poonam was also one of 30 other visually impaired women at the Pinkathon in 2015. She won the second place for 5k run in the visually impaired category,. She has also taken part in a rock-climbing session organised in the United States.

Mohammad Niyamath is equally inspiring. He was affected by polio and his right leg is shorter than the left. He had no interest in adventure sports until he participated in a trek organised by an NGO. He never thought he could do it but he soon became the first disabled person to climb walls along with regular climbers. He soon got appointed as a trainer at an indoor rock-climbing place and now trains other people.

Mohammed uses a caliper, and his upper-body strength to climb. He has fallen a few times but that has not stopped him. He has also taken part in many international events and won medals. He is proud of the fact that he recently trained six blind people at the National Sport Climbing Championship held in Jammu and Kashmir recently.

Shalini Saraswathi, a quadruple amputee, derives a lot of joy from running. The 39-year-old has also participated in the TCS World 10K twice in 2016 and 2017. She lost all her four limbs after a rare bacterial infection. Thanks to her family’s support, she has been able to pursue her passion for running.