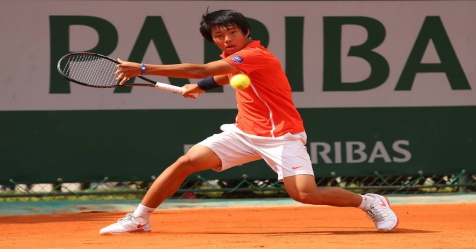 Lee Duck-Hee cannot hear the cheers of the crowd, or the sound of the racquet hitting the tennis ball, but this South Korean professional tennis player still has his sights set on qualifying for the main draw at the Wimbledon next week.

The 20-year-old player is proud of being the only deaf professional tennis player in the world at the moment. He hopes that every step he takes as a tennis player will encourage other dead people to overcome their disability and work towards making their dream come true.

Lee observes the way opponents swing for the ball to read the game. Often his game has been affected because he has been confused by hand signals of the officials. Yet, he reached an incredible career-high ranking of 130 in April 2017.

He is now ranked 233 and has come very close to Grand Slam main draws. He even reached the final round of qualifying at the French Open in May where he had two match points before losing in a third set tie-break.

Lee first picked up a tennis racquet at the age of seven after he saw his cousin playing. He has always looked for creative ways to read the game as he could not hear.

He has to focus on watching and expecting the opponent’s swing and movement. All this needs very intense concentration and fast decision-making.

Lee has not learnt sign language, so lip reads officials or looks at their hand signals, with confusing outcomes.

Lee has three short-term goals – breaking into the top 100, winning a Challenger title, and gaining direct entry to the main draws of ATP and Grand Slam tournaments.