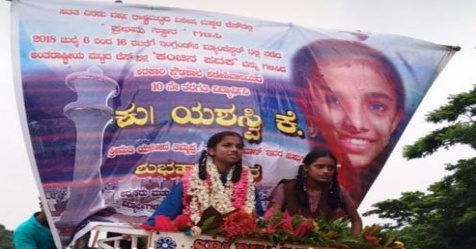 Yashaswi is the newest star in India’s world of para sports. This young girl, who is deaf, won a bronze for India at an international deaf chess tournament held in Manchester, United Kingdom recently.

Yashaswi, who is from Bantwal in Karnataka, has a 1300 rating in chess. Her father is a laboratory assistant at a college in Bantwal, while her mother is a government school teacher. Yashaswi was two years old when her parents found out that she was deaf like her elder sister. This was not an issue for her family, who encouraged her in every way.

She was very interested in chess right from childhood. The support of her parents encouraged her to take the game seriously. Even as a primary school student, Yashaswi won several trophies in chess tournaments for children.

She was chosen for a state-level chess tournament in 2016-17 and represented Karnataka in the national level deaf chess championship held in Kerala where she won the first prize.