First as a soldier & now as a sportsperson, Suresh Karki continues to make India proud 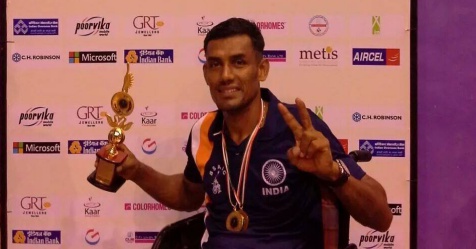 The will and determination shown by India’s jawans is legendary. Their daring deeds at the borders and on the battlefield is well known.

Suresh Kumar Karki, a retired Lance Naik, is the very symbol of that. Karki met with an accident that made him a paraplegic and he had to retire from the Army. His strong will remained unbeaten and this retired jawan now represents India in various international sporting events. He has won many medals in basketball, which Karki believes is another way of serving the country.

Posted in the Gorkha Rifles, Suresh was a part of a platoon stationed in Assam during the 2004 conflict. His bus met with an accident and his spinal cord was damaged.

He was in severe pain and went through many surgeries. His treatment continued for many years and he was admitted to the paraplegic rehabilitation center in Pune where he saw many people with problems like his.

He also saw that they participated enthusiastically in sports like basketball and badminton. This motivated Karki to move past his pain.

Karki has won gold in various national badminton tournaments. He is also a part of the Maharashtra that has won the national championship every year since 2014.

Karki focuses on badminton and basketball. He has set himself a higher target, which is the 2020 Para Olympics.