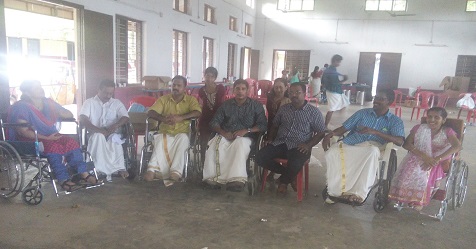 Thanal Paraplegic Patients Welfare Society is a group of paraplegic people who aims to provide specialised skills and training to wheelchair users in Kerala. It all began in 2014 when a group of wheelchair users decided to do something for their community members. Most of them were idle to leave the comfort of their homes. They preferred sitting indoors, hence missing so many things in the outside world!

This small community was active on social media. But they decided that it was time for them to take it to the next level to empower more people. A group of seven people from different parts of Kerala joined hands to create Thanal. This group has already provided skill training to many wheelchair users and empowered over 250 people!

Thanal has organised many skill training camps in various parts of Kerala. Most of it was at Ernakulam, Thrissur and Idukki districts. But the organizers also ensure that no more than 15 people are included in one camp. This way, they can channelize all their energy into these 15 participants.

For members of Thanal, success of the camp is all about the number of people who are empowered!

Participants are given classes on how to make soap, phenyl, soap powders and even jewellery. Once they learn these skills, Thanal supports them to do this from their homes. They earn a livelihood without spending thousands of rupees!

What makes this group of people unique is that all of them are wheelchair users who have marked their identity in various sectors. From moving around to organizing things on their own, nothing can dampen the spirits of these youngsters.

Thanal is now gearing up to do their bit for flood struck victims of Kerala!

We are organizing a small event at Keezhillam in Kerala on 2 September. We aim to provide medical aid, food kits and basic stuff to disabled people who have been affected by floods. I had visited the camps at Chengannur which was one of the worst hit areas. I did not spot too many disabled people out there. All of them could move into their relative’s homes. Relief camps were not accessible for people with disabilities- Rajeev Rajan, President, Thanal Paraplegic Patients Welfare Society.

Even though Thanal works from Kerala, organizers plan to spread wings to other parts of India as well. They are already in talks with individuals and NGO’s for this.