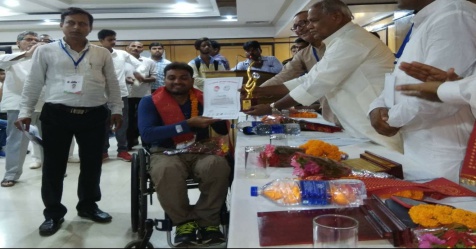 The Bihar Khel Ratna award has been awarded to para swimmer Mohammed Shams Alam Sheikh. A major honour, that feels extra special as it comes from his home state.

Sheikh said it was a happy and proud moment for him and his work to be recognised by his own state and people.

The awards ceremony was held in Patna at Son Bhavan this week. 30-year-old Sheikh, a mechanical engineer by training and a black belt karate player, became paraplegic after he was diagnosed with a spinal tumour and underwent many operations.

He took up swimming as physiotherapy and decided to pursue it seriously. His has been a remarkable journey as he has struggled for official support and sponsorship.

I feel this award is not just a word but a way to show to society that we can achieve whatever we wish or dream for. I also felt happy that the ex Bihar chief minister, Jitan Ram Manjhi, said at the awards ceremony that the state government must give priority to people with disabilities. – Mohammed Shams Alam Shaikh, Para swimmer

Shaikh is preparing for the upcoming Asian Para Games. He will join the national coaching camp later this week. He says the recognition will help him emotionally and mentally to work harder towards raising awareness about accessibility.