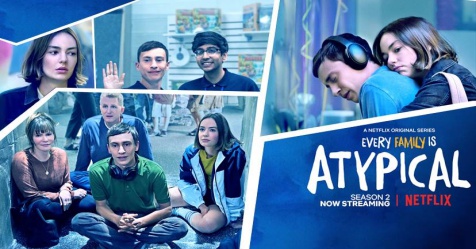 Atypical, the Netflix series that focuses on autism, is not the first TV series to put a strong focus on the developmental disorder. There have been many others like ABC’s The Good Doctor and reality show Born This Way. on A&E.

In its second season though, Atypical has certainly raised the bar by hiring over a dozen actors who are on the spectrum to appear in the series.

A family drama, Atypical is about the growing up experiences of Sam, a teenager with autism, as he struggles with issues like feelings for the opposite sex and coping with other typical teenage blues.

For Nikita Bakhshi, who has a brother with autism, the series goes beyond the ‘tokenistic’ gestures of the past.

We hear once in a while of a model with Down’s syndrome being represented during a fashion show. It is praiseworthy that the producers and directors of the show realised the need for ‘normalising’ disability and giving hope to individuals like my brother, who is
extremely fond of performing arts to be represented authentically in the mainstream media, and not an exaggerated stereotypical version. – Nikita Bakhshi, Student

In the second season Sam is shown coping with the fact that his parents are facing marital problems and facing up to ending a relationship. The tone taken is warm, quirky and funny, and the approach has touched many hearts.

The Atypical team researched autism in an in-depth manner to create a series that is both genuine and respectful.

An approach largely missing in mainstream Hindi films, as pointed out by Anupama Bakhshi, an autism parent.

“The projection of disability is so bizarre and so out of proportion in Hindi films. Take the films with Priyanka Chopra for instance where she portrayed disability in a way that’s quite out of touch with reality. There are so many different types on the spectrum but the way Hindi films portray them is quite unrealistic. “