Running with a visual disability is about equality, not greatness, says marathoner Vineet Saraiwala 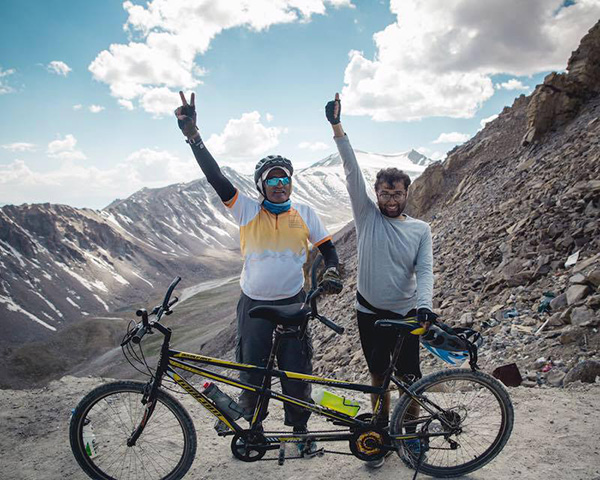 As a child growing up in Jamshedpur, a run at the town’s Jubilee Park was a thrill for Vineet Saraiwala. With his mamaji, a marathoner, holding his hand, Vineet would feel free and happy as he ran about, unbothered by the fact that he was visually impaired.

It was that sense of adventure and liberation that drew Vineet to marathons when he was older, with his uncle acting as coach and running partner.

Today, Vineet is a seasoned runner, with five marathons to his credit. He likes to run with a partner using a tether, which he holds on one end and the partner on the other, a technique he was introduced to by Reuben, a blind runner from Israel some years ago.

Vineet’s fifth marathon was a 21-km run through Leh just a few weeks ago, with filmmaker Amrit Vatsa as his partner. They finished the run almost one hour before the allotted time.

Running can sometimes become boring, but having a companion always boosts you. Whenever a marathon starts, navigating the initial part is tough because of the crowds. But as it progresses, I love the atmosphere, the sound of the drums, the emotions, and most importantly the feeling of being free. Visual cues from my partner helps me to recreate the entire picture in my mind. I feel runners with a visual disability actually run the race in their head and it is completely internal in nature. – Vineet Saraiwala, Blind runner

Amrit and Vineet met up a few years ago during a tandem cycling expedition to Manali, where Amrit was making a film for the Adventure Beyond Barriers Foundation. When Vineet approached him earlier this year for the Ladakh half marathon, Amrit agreed readily. The only thing he was concerned about was matching Vineet’s pace, as he was out of practice.

The two practiced for six weeks prior to the Leh run, even managing to put in a marathon in Pune to be sure of their rhythm.

For Amrit, who has always run alone, running with a visually impaired person, was a new experience.

“We were not running too fast, so we could easily talk and run. And that made the whole run pretty fun. I would alert Vineet whenever I thought it might help us keep a good pace. I also tried to describe a bit of what was around us. When your partner is blind, it is definitely your responsibility to make sure accidents don’t happen. That’s why you are there in the first place.”

For Vineet, running marathons is not just about building endurance. It is also about sending out a message that anyone can run, and that running with a disability is no big deal. He says technology has made it a level playing field, as it enables blind runners to participate alongside sighted people. He encourages blind and visually impaired people to use a tether as it does not affect the running posture.

“Whenever I run, I am in the spotlight with attention from cameras and other runners. It might be a mixture of curiosity, amazement and sympathy. I want to get it straight that yes, blind people can run and there is nothing great about it. Appreciate us as a fellow runner, as humans, as equals. But please do not appreciate us as blind people who can run because we have legs.”

As Amrit puts it, this is simply a story of two friends who came together.

“Even a simple act of running a marathon or cycling is made into a story of ‘inspiration’ and ‘greatness’. When two people run, and one has a disability, it is simply assumed that the able-bodied is ‘helping’ the person with disability. Vineet and I are just two friends. We ran together as friends – not to help each other, but just to hang out and do cool things.”

Vineet and Amrit plan to make a film on the journey leading up to the Ladakh marathon. Here is a small glimpse of reactions from the streets of Leh to the idea of a blind person running.