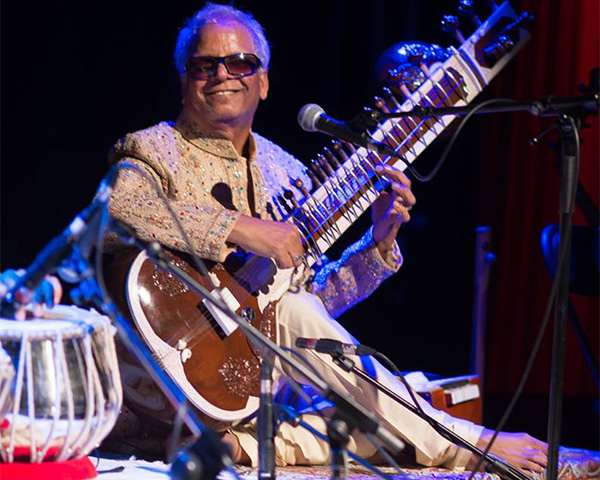 For Baluji Shrivastav, the world of music began by listening to the rhythms of his body. Born in Uttar Pradesh, Shrivastav became visually impaired when he was eight months old. The beat of his heart and the flow of his blood, he says, was his introduction to the world of music.

Renowned as a multi-instrumental wonder, Shrivastav can play the sitar, the pakhwaj, the tabla and the dilruba. He is now in India for a series of performances. He has a rich and versatile career, having played with Stevie Wonder and Coldplay. He has also recorded with Annie Lennox and the band Oasis.

Now largely based in the United Kingdom. he was honored with the title, Officer of the Order of the British Empire (OBE) in 2016 by the Queen.

His two-hour show, called Antardrishti: Inner Vision. is a group performance that renders the eleventh chapter of the Bhagavad Gita. The show is quite a feat, bringing together a mix of music, dance and audio-visual media.

He chose the Mahabharata for his India performance because of the character, Dhritarashtra, who himself was blind. Shrivastav is familiar with the Gita as he was taught one shloka everyday as a child.

Shrivastav, who is now 67 years old, heads the Baluji Music Foundation. He is also the founder of the Inner Vision Orchestra, which is the United Kingdom’s only blind ensemble. The troupe is here in India to perform with him. Accompanying the orchestra, was an Indian classical dance group as well.

At the end of the show in New Delhi, Shrivastav made a powerful statement for inclusion, saying that his show aims to shatter the notion that visually impaired music artistes cannot play for a dance show. In the past too, Shrivastav has used his concerts to make a passionate plea for blind musicians to be treated on part with their sighted peers.

Music is not designed only for sighted people, but the whole being. – Baluji Shrivastav,

As someone who has faced discrimination for his disability, he is determined to bring about a social change to create a level playing field for blind musicians.

His concerts are seen as a powerful statement of social justice, in that they show visually impaired musicians defy popular prejudices to demonstrate their skill.