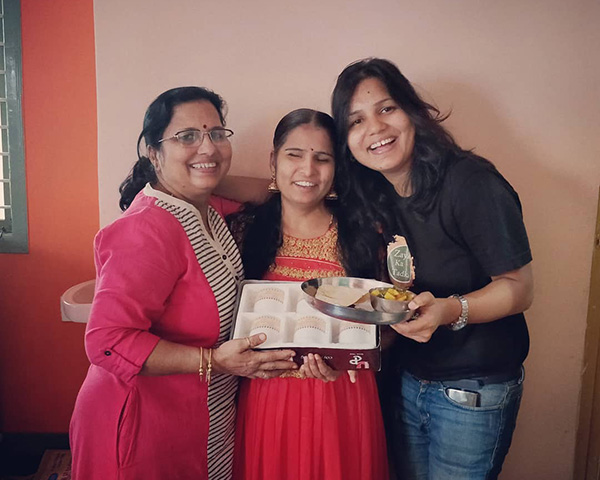 You don’t need sight to cook well, just some planning and lots of love.

That’s the message popular cooking show Zayka ka Tadka hopes to convey in its third season that kicked off on 19 September. This season is dedicated to showcasing the skills of blind mothers.

Zayka ka Tadka was launched in 2016 by Vijay Haldia and her daughter Apeksha. The show offers a live cooking platform to mothers and homemakers in India, and claims to have over one million followers, with over 100 registered food authors. The show has covered over 600 mothers so far through live videos.

The third season will feature five visually impaired mothers, each of them cooking something she likes, as she talks about her life and approach to cooking. This is being shown live on Facebook from 4 pm onwards, with viewers calling in with questions and comments.

Apeksha, who hosts the show, says she hit upon the idea during a chance meeting with Shekhar Naik, former captain of the Indian blind cricket team.

“In the first and second seasons, we focused on mothers, followed by grandmothers. When I was talking to Shekhar Naik, he told me how visually impaired people can do anything, even cook. And I thought why not do a season on visually impaired mothers. The great thing is that he was willing to be a part of this.”

Naik, who is the face of the show, also helped to shortlist the five mothers who are being featured in this season. He will decide upon the winner as well. This season’s participants are from Bengaluru, but Haldia hopes to feature visually impaired mothers from other cities in the future.

I am very happy to be a part of this great event! There are a lot of cooking channels but Zayka Ka Tadka is the only one doing this creative thing for the blind. Having 16 blind members in my family, I know we have to overcome a lot of challenges in life. This would
give a great motivational boost and self-confidence to visually challenged people as
we always compare ourselves with “normal” people. – Shekhar Naik, Former blind cricket captain

The first episode took viewers to the home of Geeta Shinde, who made vegetable biryani and cucumber raita. A working professional for 22 years, Geeta likes to cook for her family everyday. She also loves to eat. Shinde lost her vision at the age of 25, and on the show she shares the secret to her success in the kitchen.

“I learned cooking before marriage. It is not a big deal. All you need to make sure is that the items you need are placed correctly. When you are visually challenged, other senses like smell and hearing becomes heightened. I realized that after I lost my sight”.

Through the episode, viewers posted comments asking for details of the ingredients used and the amounts. There were also many comments like ‘super mom’, ‘great mom’ and ‘you are an inspiration’. Clearly, the concept is touching many hearts.

You can watch the season from 4 pm on Zayda ka Tadka’s Facebook page from 19 to 23 September.