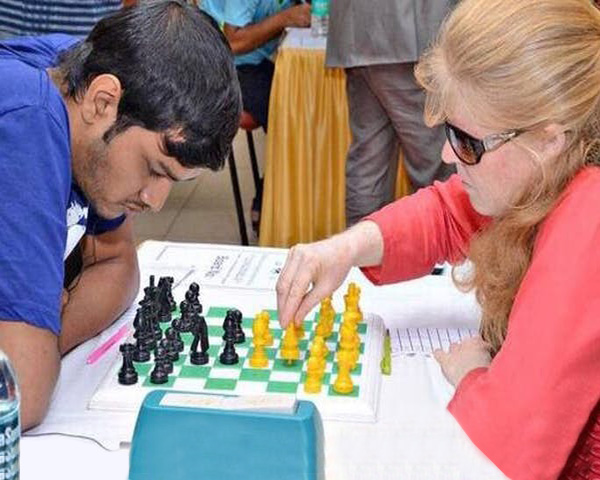 All eyes are on Vaishali Narendra Salavkar, the first Indian blind chess player to be a part of the International Braille Chess Association (IBCA) team at the World Chess Olympiad, which started in Georgia on Sunday.

Vaishali, who is 45 years old, has been playing chess for over 20 years. A seven-time national champion, she is highly regarded in the world of chess. Vaishali got the opportunity to play in the Olympiad as a Chinese player was not able to take part, said Dr Charudutt Jadhav, President, IBCA

Vaishali is one of the strongest players from India. She could have been among the top 10 in the world but for the fact that India did not send a team for the women’s championship for the last two years as we did not have enough players. Most parents don’t want to send their daughters outside their states to take part. – Dr Charudutt Jadhav, President, IBCA

The other Indian female chess player who will also be playing in the Olympiad is Malika Handa, who is a part of the International Chess Committee of Deaf (ICCD).

Dr Jadhav believes that India has the potential to be among the top three teams in the world in the blind chess if there is right focus and training given. From 20 October, IBCA plans to hold a national seminar to frame a strategy to encourage promising female blind chess players.

“We plan to create a comprehensive plan to come up with a dedicated team of women’s players. If we achieve 50% of the goals set, we will be in the top three teams. The plan is to conduct tournaments at the local level to encourage players to come forward. We already have many promising players from West Bengal and Gujarat”.

2025 is the target year set by IBCA to achieve their goals. Since 2017, the organization has been meeting regularly to strategize and come up with a future plan

“Instead of always chasing the government for support. it is better we look inwards and aim for the best”, believes Dr Jadhav. “The point is we have the talent and we should focus our goals on doing the best for India. “