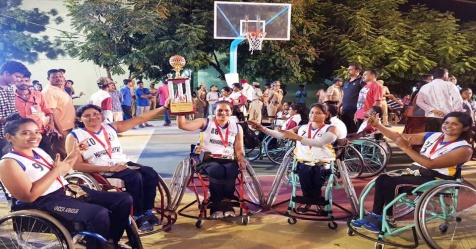 It was a nail-biting match as Maharashtra and Tamil Nadu fought it out for the national title in the National Wheelchair Basketball Championship.

At one point, it looked like defending champions Tamil Nadu were all set to win the crown yet again, as they were ahead 6-0.

However, a strong fightback by the Maharashtra team saw them clinch the match 22-18. It was a sweet victory given that Tamil Nadu had routed Maharashtra, 6-0, in the 2017 finals.

The turnaround moment was thanks to the ingenuity and quick thinking shown by Geetha Chouhan, Kartiki Patel and Nisha Gupta, who played their hearts out to equalise the score.

Tamil Nadu had won the title for four years straight so this victory is rather special. We played this game under a lot of pressure as they really way ahead. – Nisha Gupta, Maharashtra wheelchair basketball team

Karthiki Patel,Captain of the Maharashtra team said the entire team had come together to work hard for this match.

“Tamil Nadu was a tough opponent and we were trailing half-time but the entire team did not give up and we continued playing our best. In the end they were trailing by six points. In the last 45 seconds they made one basket and the end score was 22-18.”

Ten months of intense training went into this victory. At first the Maharashtra women’s team would practice on weekends in Borivali.

“Since April 2018 onwards, we were fortunate to be allowed to practise at the Mumbai University Indoor wooden Basketball Court at Kalina”, says Captain Louis George, the Team Coach, who sits on a wheelchair and practices along with the players. “We practised at Kalina for five months on Saturdays and Sundays.”

Nisha, who became active in sports after she was disabled in an accident, plans to continue playing basketball seriously. She is a seasoned player, with experience in international events. She was even part of the team that won a bronze in a Bali championship in 2016.

“After my accident I took to swimming initially. Then my coach told me to take up basketball too and that is how I started”, says Nisha.

Dinkle Shah, the youngest member of the winning team, plans to continue playing basketball at a competitive level, along with studying for an MBA degree. The growing recognition for para sports, she says is very encouraging.

“Initially we would not get any cash prizes but over the last two years that has changed. Sponsorships are common and there is more recognition as well, which feels really good”.

These young women have been encouraged by the NGO Nina Foundation, which works to enable and support people with spinal cord injuries. The organization is determined to encourage more talent and is organising a three-day camp in wheelchair basketball with international coaches on 16, 17 and 18 November 2018.

ALSO READ:
Wheelchair basketball has given these men the will to chase their dreams