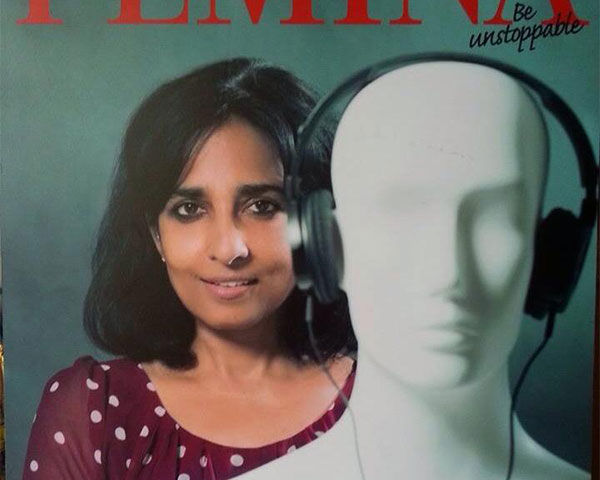 Sangeeta Gala still remembers the day the day she went to actor Nana Patekar‘s house for the interview. He was sitting with a bunch of people, discussing an upcoming production. After some time Patekar asked the group if it was okay to smoke. Sangeeta spoke up, and Patekar turned to look at her. “If I tell you not to smoke, will you listen? Everybody started laughing…”

And that’s what helped her get into films, or so Gala believes. “Nana said he selected me because liked my confidence, and chose me to train him for Khamoshi“. Patekar played Joseph, the film’s deaf-and-mute protagonist.

Born into a Gujarati family, Sangeeta’s hearing disability was diagnosed when she was two years old.

My parents put me in an English-medium school to give me the best possible opportunities.

Sangeeta went on to graduate in psychology from Jai Hind College, Mumbai.

Right from childhood, Sangeeta was mad about the movies. Watching films, silently and without subtitles, was such a moving experience for her that tears would often well up in her eyes.

She wanted to be part of this magic world, a dream that came true later. After college, she pursued a career in athletics, followed by social work.

Then one day a friend told her that director Sanjay Leela Bhansali was looking for deaf people. All excited, she applied but was not selected. “I was heartbroken and felt that was the end of that”.

Luckily, Sanjay wasn’t satisfied with what he’d got and told his Assistant Director to go hunting for good talent. “A person who’d come to the Bombay Foundation of Deaf Women saw me signing and asked me to join the film Khamoshi to teach sign language to hearing actors. He said he will take me for an interview”.

After the film was over, Bhansali went on to make Hum Dil De Chuke Sanam. Sangeeta thought Khamoshi was her one fling with fate. She moved on.

Their paths crossed again when he started working on Devdas. But this time, Sanjay wanted Sangeeta to join him as Assistant Director. “I was happily surprised. I told him that I haven’t learnt (filmmaking), don’t have enough experience. He assured me that he’d seen me working on Khamoshi and had full confidence”.

It was difficult at the outset and she went to Sanjay and said she wanted to quit. “Sanjay told me to be brave. Politics is everywhere, but I need to keep fighting. I worked hard, learnt the ropes and have worked on all his films ever since”>

Sangeeta now works as associate director with Sanjay and also freelances as a trainer to actors playing hearing or speech-impaired characters.

She says, however, that it’s not only about sign language.

“I had to teach them about deaf culture, deaf problems, awareness about the ways of the deaf, their family issues, confidence, etc. I also tell them to meet deaf people, observe them”. She doesn’t use an interpreter while teaching as there’s no problem communicating since she can speak and write well.

She’s worked with Sanjay on many movies, like Black, Guzaarish, Saawariya, Raam Leela, Barfi, etc. Sangeeta has also worked with Mani Ratnam on both the Hindi and Tamil versions of his film Raavan, and the silent Indian sign-language national anthem that plays in cinema halls. She last worked with Anurag Kashyap on Mukkabaaz.

Sangeeta first met Ranbir Kapoor while working on Black, who was then assisting Sanjay on the film. “He learnt some sign language when we worked together in Black and remembered it when I trained him for Barfi”.

The actors who picked up sign language the best were Ranbir, Tamil actor Vikram and Zoya (Mukkabaaz). They, along with Amitabh Bachchan, are also actors who have treated her with a lot of respect. “I will never forget that”.

There are a couple of reasons why the film industry doesn’t cast disabled people in acting roles. For wheelchair users, for instance, there’s the matter of accessibility, with electrical wires, set, etc., equipment all over the set. The other is the matter of monies. People come to watch if the film has a well-known star cast. “It is business which is the barrier”. She wants to select & include real disabled actors for films provided they can perform.

But Gala has one regret. “I couldn’t meet Rajesh Khanna, the one man I so adored”.