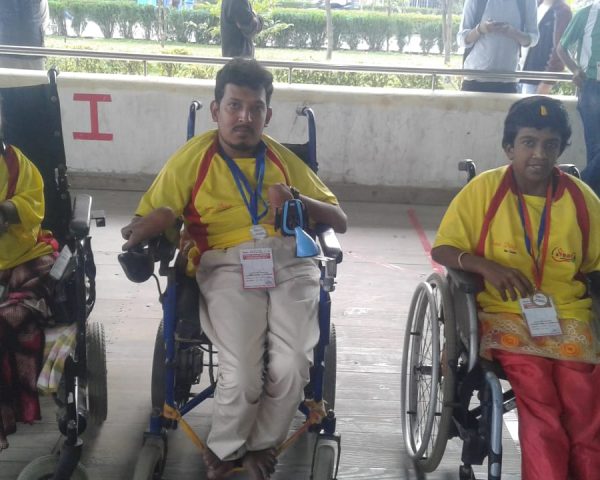 It is World Cerebral Palsy Day later this week and to mark the occasion, an inter-school boccia competition is being held by NGO Vidya Sagar, which reaches out to people with developmental disabilities.

Six schools for kids with disabilities in and around Chennai will compete for the top title. The competition will start off with a demo event for children who are new to the sport.

A Paralympic sport, boccia can be played by anyone, with or without a disability. It was originally designed for people with severe cerebral palsy. Today, it is enjoyed by players with a wide range of disabilities.

While it is easy for a newbie to pick up, it scales up in intensity and complexity as players sharpen their skills.

There are not many games that children with cerebral palsy can take part in. For instance, they cannot take part in athletics or sports basketball. As 6 October is World Cerebral Palsy Day, we decided to celebrate it with a boccia event, which a person with any physical disability can play, even someone with just finger movements. – Simy C A, Physiotherapist, NGO Vidya Sagar

The hope is to eventually popularize the game across India so that boccia becomes a national-level sport and one day even send a team for international events.

Boccia can be played by individuals, pairs, or teams of three. The aim of the game is to throw balls, that can be red or blue, as close as possible to a white target ball, which is called jack.

The jack is thrown first, then the first two balls are played. After this, the side furthest away from the jack tries to either get closer to the jack or knock the opposition’s ball out of the way. This goes on until one side has played all the balls, after which the opposing side plays their remaining balls.

The balls can be moved with hands, feet, or an assistive device as well. After each round, the referee measures the distance of the balls closest to the jack, and awards points accordingly.

The event in Chennai is for kids between the ages of 12 to 20 years. For children below 12 years there is a demo game where they will get to learn these steps. “Many schools don’t know about Boccia, so we thought this was a good opportunity to learn about the game”, says Simy.

Mentoring the new players will be 22-year-old Nagamanjali, who has been playing the game for three years now.

Her mother Anandi Chandrashekhar says she took to the game instantly when it was introduced it at the Vidya Sagar school. An avid sports lover, Nagamanjali, who has cerebral palsy, loves the opportunity to be able to play a game.

“This is a ball game specially designed for wheelchair users and Nagamanjali took to it instantly. Now she is a seasoned player and knows the rules. She plays every Saturday for two hours after her computer class”, says Anandi.

Nagamanjali, who is looking forward to teaching the young ones the tricks the sport agrees. “This game has been designed for us. I love all games but this one is special for me as it is for wheelchair users”.

This young woman definitely shows all the signs of making it to the national team!