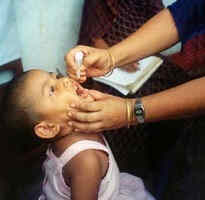 Batches of polio vaccines from all companies will be tested as per the instructions of the Drug Controller General of India (DCGI). This is to rule out the possibility of contamination.

The DCGI has asked that the batches be tested for types of P1, P2 and P3 strains. This is after traces of polio type 2 virus were found in some batches of oral polio vaccine (OPV) made by the company Bio-Med Pvt. Ltd in Ghaziabad. Type 2 is regarded as the strain which is known to have been eradicated from India.

The contamination was known 15 days ago when the World Health Organization (WHO) found signs of the virus in stool samples from Uttar Pradesh. Testing showed the samples were contaminated with type 2 virus.

In a statement the WHO said:

This detection indicates the use of a vaccine containing the type 2 poliovirus, despite the fact that vaccines containing type 2 poliovirus (trivalent oral polio vaccine) have been phased out globally and in India in April 2016 as a part of the polio end game strategy. As elsewhere, bivalent oral polio vaccine (bOPV) has replaced the trivalent OPV (tOPV) in all polio campaigns and routine immunization in India.

In 2016, India, along with other countries switched to the bivalent vaccine, without the type 2 strain. All manufacturers had to follow orders to destroy their stocks of vaccines with Type 2 of the polio virus in it.

But this contamination shows that type 2 virus strains were not effectively destroyed. It is clear that some companies had kept them as samples and the government had not done a good job of monitoring the destruction of the strain in 2016.

Now the Union Health Ministry claims it has taken steps to increase the coverage of immunization in areas where the contaminated vaccine has been used. These states have also been asked to give injectable polio vaccine (IPV) to those children who have not received it yet. surveillance has been enhanced in Uttar Pradesh, Maharashtra and Telangana after traces of type-2 virus were found in some batches.

An action plan to intensify the vaccination drive, Mission Indradhanush in the states has also been announced.

India was declared polio free in 2014 after years of battle. The last case was reported in 2011 from West Bengal.

While the government says India will remain polio free, it will have to monitor the children who were given these contaminated vaccines for at least six months to check if signs of polio show up in them. For now, the risk seems little but the government will have to do some strict monitoring.