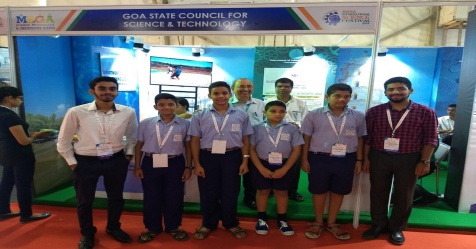 Walking sticks are used by many blind and visually impaired people to move around, but they are not very good when it comes to protecting them against injuries above the knee. This is because the typical cane used does not detect obstacles at a higher level.

When a team of students from the Dr K B Hedgewar High School in Cujira, Goa, heard about this, they decided to put on their thinking hats.

Their solution is a wristband, that is worn like a watch, and helps blind and visually impaired people detect obstacles in their path up to a distance of about a metre. It has to be used along with a regular walking stick.

One of the school’s core committee members
observed how people who are blind and visually impaired often suffer major injuries above the knee. That led our students to think of developing a device that could help them to move around safely. – Chintaman Shirodkar, Head, Atal Mentoring Lab

The Atal Mentoring Lab (ATL at the school, headed by Shirodkar and Swapnil Vengurlerkar is equipped with state-of- the-art devices like 3-D printers.

Here the team of four students from class 8, led by Varad Satarkar and Suhail Bhandare worked on the wristband for over six months using ultra sensors and vibrators.

“There are similar devices available in the market, but they are either too bulky or difficult to manage while traveling”, says Shirodkar. “One of the students suggested a wristwatch and that triggered the idea of a wristband.”

The wristband was showcased at the 4th India International Science Festival in Lucknow in early October. The device was presented alongside innovations by students from engineering colleges as well as startups.

“We do a lot of projects like this in our lab”, says Vilas Satarkar, Principal. “We are happy that we are able to inculcate in our students the importance of helping people with day to day problems”.

Varad and Sohail are now working on making some improvements to the wristband. “We want to make it compact”, says Sohail. ‘We also want to find a way to bring in an alert system that will help visually impaired people while they are crossing the road”.

Varad is happy with the overall response. “The idea was triggered by something that our core committee member said. We are happy that people have called it good and excellent”.

The school plans to improve upon it even further after feedback from organizations like the National Association for the Blind (NAB).