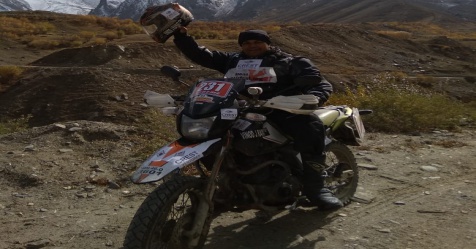 Even as a young boy, all Vinod Rawat dreamed about was living an adventurous life. A dream he never gave up on even when he lost his left leg in an accident at the age of six.

It is his determination and passion that led him to recently compete in the world’s highest cross-country rally, the Raid de Himalaya, along with Ashok Munne, also an amputee. Rawat came third in the rally.

Munne and Rawat, who are para-athletes, have achieved the distinction of becoming the world’s first amputees to compete in the event, which ranks among the top 10 of the toughest rallies in the world.

Rawat has been living the Raid dream since 2011 when he first heard about the rally. A passionate biker, he started learning how to ride a cycle as soon as he got a Jaipur Foot at the age of 25. Within a month, he had mastered how to ride a motorbike and was raring to go to the place everyone regards as a biker’s dream – Ladakh.

That was easier said than done. As Rawat puts it, “acceptance was a bigger challenge than the Raid de Himalaya.”

I was told that to ride in Ladakh, I would have to train with a group and so I joined one. Within a week of joining up, we went for a fun ride to Lonavala, where we had to spend the night. Before going to sleep, I took my leg off to sleep. Everyone saw that and rejected me. They said that with my disability, I could not be a part. That’s when I realized what an attitude barrier I had to face. – Vinod Rawat, Amputee biker

Undeterred, Rawat decided to form a club in 2010, one made up of people with disabilities. Called Convoy Control Club, it has nine chapters across India. He also started visiting Leh every year from 2011 to practice motorcycling there so his body got used to the high-altitude terrain. As part of his preparation he went to Leh on a cycle rally in 2017 from Manali via Khardung La.

For his journey, he chose Munne, who runs an adventure company in Nagpur. The two men had met at a fashion show in 2015 and struck up a friendship. Munne, who lost his leg in a train accident when he was 24 years old, had dreamed of taking part in the Raid from 2015.

Like Rawat, he enjoys every opportunity to prove people, when they say things like, ‘you can’t do it.’

“I underwent three surgeries after my accident and everyone around me, including close relatives, would say things like, ‘He is useless now’, ‘He will have to beg for a living’, ‘His life is over.’ Such remarks motivated me. I decided to live my life in such a way that people without disabilities would look at me and say ”This is how I want to live,’ says Munne.

Munne runs, swims and bikes every day to stay fit. The Raid is just one of the many goalposts ahead.

Inspiring men, whose passion for life, is truly worth learning from.