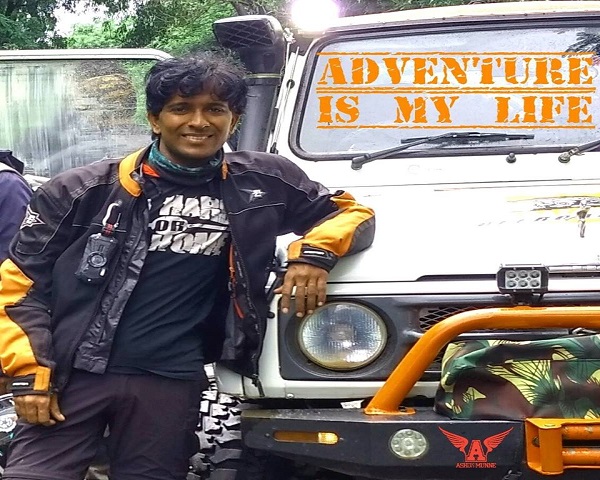 Love for adventure, never-say-die spirit, and a high fitness level enabled Ashok Munne to cope when he lost his leg in a train accident at the age of 24.

That, coupled with his desire to prove a point to those who wrote him off as ‘useless’, led him to embrace a life of action with a vengeance after he healed.

An accomplished para-athlete, Munne recently achieved the distinction of finishing the Raid de Himalaya, which ranks among the top 10 of the toughest rallies in the world. Munne runs, swims and bikes every day to stay fit.

He is determined to promote this spirit among more people, a desire that led him to launch Ashok Munne Adventures and Resort. The resort is still in the works, but Munne’s adventure packages are already making a mark.

I want to climb Mount Everest and after I lost my leg, I looked for various classes where I could train for the purpose. I even met people who had done the climb and found that unlike their motivational speeches on YouTube, they were very dismissive in person. They told me things like, ‘you can’t speak English’, or ‘you don’t earn enough.’ That led me to start my own company. – Ashok Munne, Amputee biker

Munne’s biking expeditions are inclusive, open to people with and without disabilities. The trips are usually 5-7 days long and many of those who sign up are first-timers. All that he asks is that they be reasonably fit, so they can tackle mountain rides, river rafting, and various other adventures that come up on the course of the trip.

“We have done trips all over the Vidarbha region in Maharashtra, where there is plenty to see,” says Munne. “We have also organized a 1500-km ride in Madhya Pradesh and one in Chhattisgarh. We go through jungles, deserts, and other kinds of hard terrain.”

Among the regulars is Colonel Satish Malilk, who lost his left leg in the Kargil War.

“I was a part of a week-long motorcycling trip in Vidarbha in 2014”, says the former Army man. “I ride bikes regularly and a common friend decided to form a team of amputee riders. Munne organized the trip for us and we had a good time as we got to meet new riders.”

Trips like these are about much more than proving something to yourself, adds Colonel Malli.. “It is more about sensitizing others that life has not changed because of your disability.”

Sanjay Gajanan Patil, a Mumbai-based employee of Western Railways, who was also part of the 2014 expedition, echoes the same sentiment.

“On that Vidarbha trip, only four of us were disabled people. It helped to build team spirit and we got a chance to show others that we are not defined by our disability.”

Pranav Khankhoje, says that Munne’s rides have shattered his stereotypes about disability. “I went on a trek to Himachal Pradesh in 2012 and I realized there is nothing like disability. Society focuses on what is lacking but when I look at Munne, I don’t feel he is lesser than anyone else.”

This is exactly the kind of awareness that Munne seeks to build through his inclusive adventures – that disability does not make anyone less able.