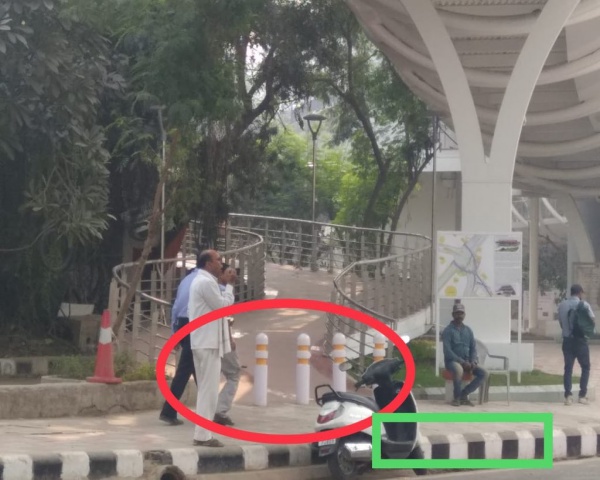 In a country notorious for official apathy, here is an instance of a successful advocacy campaign that will bring cheer to many.

Starting 26 October, in a series of tweets, noted disability rights leader Dr Satendra Singh highlighted the many ways in which an important skywalk built at the Tilak bridge intersection in New Delhi at a cost of nearly Rs 55 crore was completely inaccessible to wheelchair users. From barriers at the entry point and even at the footpath, the newly minted structure is a classic example of what an accessible public facility should NOT look like.

Calling the entire exercise a “mockery of inclusion,” Dr Singh also mentioned that there were no lifts at important intersections and the gradient is steep too. The tweets were marked to Hardeep Puri, Union Minister of State, Urban Development.

At the launch, @HardeepSPuri , @MoHUA_India said, “Considering the importance, the design of the skywalk should be unique, highly functional & aesthetic & should be recognised as one of the landmarks of Delhi.” Certainly but NOT by ignoring people with disabilities. ..What was needed was COMMON SENSE and universal design. – Dr Satendra Singh, Disability rights leader

The tweets were met with a chorus of support from disability rights leaders from across India.

Akhil Paul, Founder-Director, Sense International (India), an organization that works with deafblind people, said, “What’s happening to all the concepts and hype on “smart cities”… this is what happens when we go for slogans and never internalize!”, while Jomi John Joseph, of the All Kerala Wheelchair Rights Federation called it ,”Condemnable.”

Stung by the criticism, Minister Puri responded quickly and has promised to make the skywalk accessible as per universal design guidelines in a week’s time.

On Tuesday, he tweeted that he had raised the issue with the Public World Department and the matter would be addressed quickly.

“While elevators have been provided at all points of entry & exit, we will also ensure access ramps for the place you have kindly pointed out. have already raised this issue with the Chief Engineer of PWD. The ramps to provide easy access from road to elevators at the Skywalk will be provided within this week itself wherever these are missing or not properly provided.”

An instance of how social media can be used to mobilize public support and draw attention to an issue of genuine public interest.