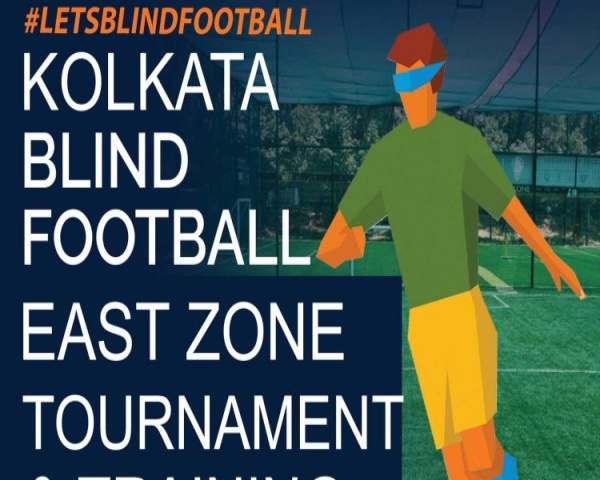 Football fans in Kolkata have an exciting weekend to look forward to. The City of Joy is hosting the First Official East Zone Blind Football Tournament on 3 and 4 November. There are six teams taking part. Two are from West Bengal, while the rest are from Sikkim, Odisha, Bihar, Mizoram and Manipur.

The games are being hosted by the Football Association For The Blind Of Bengal (FABB), which is affiliated to the Indian Blind Football Federation (IBFF), which is the apex body of the game in India.

The Bengal team has produced some champion players in blind football, with many of them representing India in national tournaments. A number of players from this state are also part of the National Blind Football Team.

One of the star players is Goutam Dey, who hopes to build greater support and popularity for blind football through this tournament.

This is the first time such a major blind football tournament is being held in West Bengal and the aim is to make the game famous. We also want the blind community to get to know about the game and take part. The public should know that this game has a future. – Goutam Dey, Member, National Blind Football Team

The tournament is being held at the Extraa Time Turf Ground in Russel Street. Entry is free and the games will be played between 10 Am to 5 PM on both days.

Blind Football is a five-a-side game played in a Futsal ground of size 40 M X 20 M with the long sides blocked with sideboards. All players are blind, except for the goalkeeper, coach and a goal guide. The players are guided by the sound of the ball which has bells inside. The three sighted members call out and direct the players to move with the ball.

Blind football is played in 60 countries and India ranks 29 in the world. The IBFF has been developing grassroots players and holding awareness camps across India since 2013.

There will be national level referees officiating the games and new referees identified and trained during the event as well. IBFF aims to develop the game in new regions and give disabled people a chance to showcase their skills in the game, says Prasenjit Adak, Assistant Secretary, BAFF.

“This is the first such competitive match in West Bengal and we are happy with the response we have received from other states. Unfortunately Jharkhand will not be taking part as they were not informed on time. We hope that like the major state-level teams, Mohan Bagan and East Bengal, blind football too will get support. We want people to know that blind people can play football and dismiss the notion that people with disabilities are a burden on society.”

So, if you are a football fan and happen to be in Kolkata this weekend, do come and cheer!