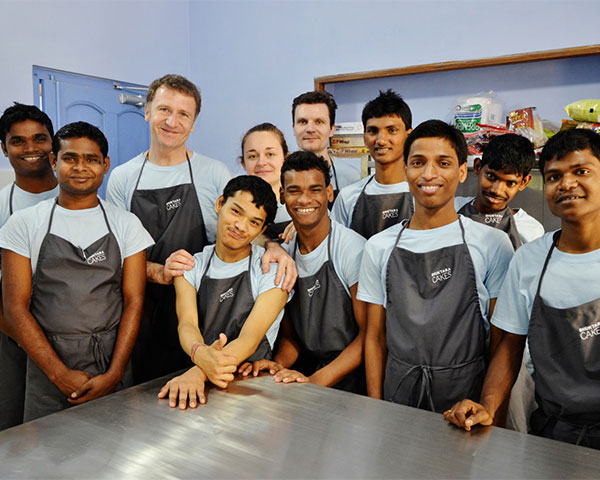 This bakery in Behala run by seven young men with disabilities consistently wins five stars for its handmade cakes and authentic French goodies. Some of the youth have cerebral palsy, while others are hearing impaired and cannot talk. However, what no one can deny is the magic in their hands, which does all the talking for them.

These young men are the children of Shuktara, which means morning star in the Bengali language. Shuktara is a home for children with disabilities with no one to care for them, and was founded by British textile designer David Earp and Nagendra Mishra in 1999.

It comes under the Shuktara Trust in the United Kingdom, which works towards enabling children with disabilities integrate into mainstream society.

While they were growing up, the boys were put under the charge of French restaurateur Alain Cojean and Fabien Rouillard, the executive pastry chef of Fauchon, a gourmet food and delicatessen company based in Paris. In just 10 weeks, the boys picked up amazing skills in baking French confectionery, leading to the launch of Shuktara Cakes in 2013.

The team of seven are between the ages of 20 to 30 years and they work under manager Somnath Sardar, who joined the bakery in early 2014. They are given roles according to their abilities and no one is under pressure to do anything, says Sardar. They set their own pace, with one person looking after deliveries, a few managing the baking and mixing, while others look after the packaging and cleaning.

The team communicates in sign language and I learned the same after joining the bakery. The response has been marvellous and every single person has appreciated their work. We have been covered by many newspapers and TV channels and the boys are always happy to see their photos in newspapers. – Somnath Sardar, Manager, Shuktara Cakes

They are paid salaries in accordance with the importance of their duties and responsibilities and typically work between five to six hours a day.

What they bring to the residents of a city known for their discerning palate is a range of French confectionery based on authentic recipes and unusual flavours like Mosambi poppy seed, Ginger Cinnamon and Mango Caramel. No wonder it keeps people coming back for more.

Alpana Roy, a self-described foodie, is among the regular customers. She has introduced many people to Shuktara’s goodies. “Everyone has loved them as they are fresh, of good quality and not creamy. I sincerely want to promote them. They are doing a great job by employing people with disabilities as well.” Another fan, Vibha Mitra, loves them as they “fresh, authentic and light, offering excellent value for money.”

An idea that sprouted over a cup of tea and a few biscuits is opening the eyes of the world to the joys of French baking, and changed the lives of a few young men, forever.

ALSO READ:
These masterchefs with disabilities whip up delights that will leave you craving for more!