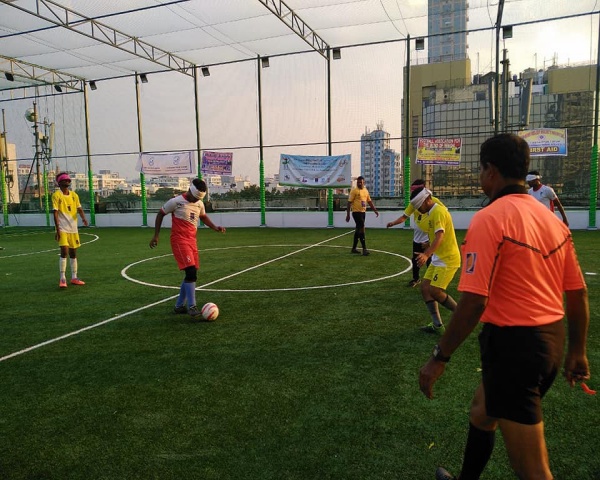 Bengal consolidated their position as undisputed champions in the first East Zone Blind Football Tournament held in Kolkata over the weekend.

The senior and junior teams of the Football Association for the Blind of Bengal clashed in the finals, with the senior, FABB-A, walking away with top honors.

Suprakash Das was the man of the moment with nine goals in the tournament and won Player of the Tournament and Man of the Match titles.

I have been playing for two years now and winning both awards in the first East Zone Tournament is very satisfying. I am hopeful that my performance here will help win me a place in the national blind football team. So many people interviewed me and came up to me today to compliment me on my skills. I am so happy that people were happy with the way I played. – Suprakash Das, Blind football player

The tournament was held at the Extra Time Turf Ground at Russel Street and there was some tough competition with teams from Manipur, Mizoram, Odisha, Bihar and Sikkim taking part. The games were hosted by the Football Association For The Blind Of Bengal (FABB), which is affiliated to the Indian Blind Football Federation (IBFF), the apex body of the game in India.

Entry for the matches was free and there was a good response from the football-crazy public, many of whom had never seen blind football before.
From former Kolkata sports minister

All very satisfying signs for national-level player Gautam Dey, who is the founder of the FABB and the man instrumental in popularizing the game.

“The response from the public was really great. So many people came up to us to pay us compliments. The FABB also got a donation of Rs eight lakh for our tournament to Andaman in February”, says Dey. “People were awestruck by the skills the players displayed, and they even told us that they found no differences in the skills shown by blind footballers and regular footballers.”

Apart from attracting sponsorships, the event will no doubt help is attracting greater talent from rural India and building greater public support.